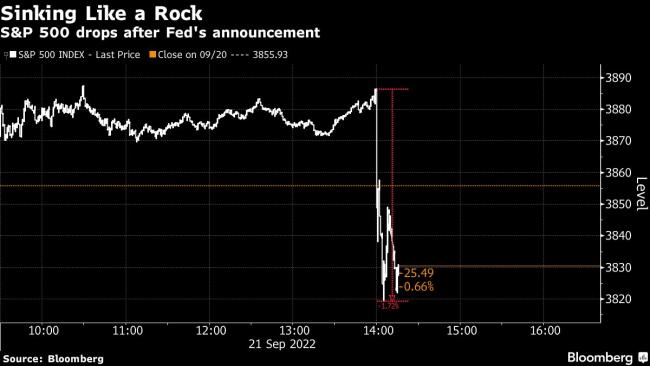 (Bloomberg) -- US stocks swung wildly and the rout in Treasuries eased after investors speculated that the Federal Reserve may have become as hawkish as it will be during its battle against inflation.

Stocks rose as much as 1.5% after dropping by nearly 1% right after the Fed cut rates by 75 basis points and officials’ projections for year-end increases rose to at least another one percentage point. The 10-year yield held just above 4%.

“It’s likely to take some time to see the full effects of changing financial conditions on inflation. We’re very much mindful of that,” fed Chair Jerome Powell said, noting that at some point it’ll be appropriate to slow the pace of rate hikes so that they can assess the impacts of them.

The sharp price moves following the decision and while Powell was speaking raised eyebrows all over Wall Street. Yet some warned that a positive market reaction made little sense.

Powell “is delivering quite the hawkish message and any immediate rally here is to be viewed with deep suspicion,” said Steve Chiavarone, senior portfolio manager at Federated Hermes (NYSE:FHI):

Here’s what other market-watchers had to say:

“Most of what we saw from the Fed in the statement and the projections is consistent with expectations. I think, though, that the economic forecasts are still too optimistic. The Fed still has unemployment rising only to 4.4%, which is only very slightly above the long-run neutral rate. I doubt that such a mild increase in unemployment will be sufficient to bring inflation back down. That said, they are clearly comfortable with a very slow return of inflation to target -- it isn’t until 2025 that their forecasts show inflation returning to 2%.”

“It seems like the market is wrestling with the possibility of higher rates at year-end on the one hand, and possibly getting the bulk of the rate hike cycle done sooner on the other hand. While rates aren’t a positive, there is some benefit to being able to move on from Fed policy as a driver back to the macro/fundamentals/valuations, etc. It’s also not surprising to see the Nasdaq/growth sell off hardest as they will face the stiffest valuation re-pricing headwinds, especially consumer discretionary growth stocks and staples/defensives leading, post-announcement. I think it’s fair to say this was a slightly hawkish surprise, but markets were expecting them to err on the hawkish side.”

“The dots and other data were carefully planned to convey a message -- more hikes this year and hikes next year more likely than not. And lo and behold, inflation comes down, no real recession, even unemployment rate doesn’t creep too high.”

“Faced with persistently high inflation, the Fed is acting aggressively to slow the economy and thereby contain rising prices. We continue to expect further market volatility as the Fed performs a delicate balancing act between working to dampen economic growth while not going too far.”

“Here is what is worrying me and others: 1) Fed QT started in September. 2) There is a lag effect of these rate hikes, which has not been fully digested by the economy yet. 3) Concern the Fed is oversteering (that is what Gundlach calls it) and will drive us into recession. And I question if these rate hikes can even control inflation. Housing is the perfect example. One of the biggest increases in CPI in August was housing -- which of course if being driven by higher interest rates. I don’t have a lot of confidence that the Fed’s actions are going to be the cure for inflation. Maybe 4-5% inflation is the new normal. And that would be OK in the short-term.”

The Fed “created this situation by keeping rates too low for too long, so now they’re being forced to take a more aggressive approach. They’re like an arsonist who works as a volunteer firefighter, who can be looked at like a champion for putting out a fire they started. Big tech is a group that will continue to bleed for the foreseeable future. At best it will match the market’s performance. At worst, it underperforms.”