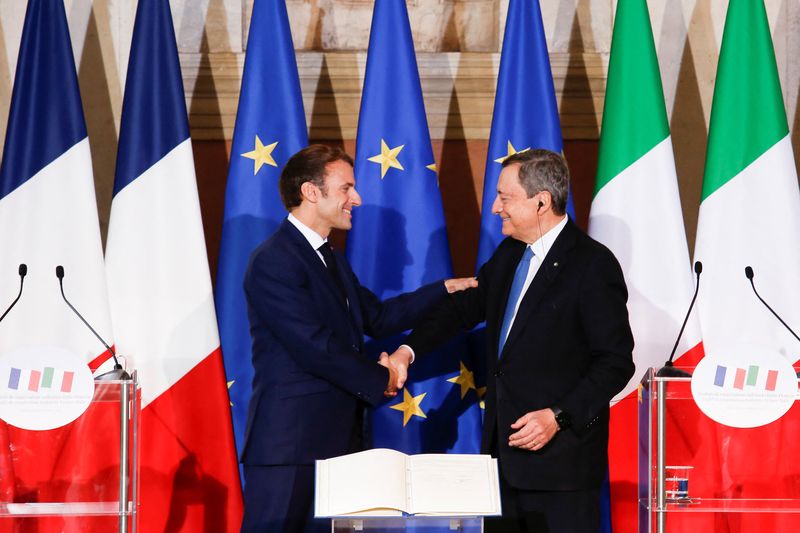 © Reuters. FILE PHOTO: French President Emmanuel Macron and Italy's Prime Minister Mario Draghi shake hands during a news conference after signing an accord to try to tilt the balance of power in Europe, at Villa Madama in Rome, Italy, November 26, 2021. REUTERS/Rem

BRUSSELS (Reuters) - France and Italy said on Thursday the idea of more permanent joint EU debt issuance deserves an in-depth discussion when the 27-nation bloc reviews its fiscal rules next year, a suggestion likely to meet with resistance from Germany.

Italian Prime Minister Mario Draghi and French President Emmanuel Macron wrote in a joint article in the Financial Times that the EU's 800 billion recovery fund, for which the bloc borrowed as a whole for the first time, has been a success that should serve as a blueprint for the future.

"New proposals will deserve in-depth discussion, not clouded by ideology, with the aim of better serving the interests of the EU as a whole," the two leaders wrote, with a link to a paper written by four economists, one of whom is Macron's adviser and another an adviser to Draghi.

The paper proposes that to deal with the surge in public debt after the COVID-19 pandemic, the EU could set up an EU Debt Management Agency which would buy from the European Central Bank debt issued during the pandemic by EU governments.

The agency would use money it raises on the market by issuing its own, EU debt, that would cost less than the national debt because the EU as a whole can borrow at better rates than individual countries.

"A debt assumption plan would consist of a gradual transfer of a portion of national public debts to a European Debt Management Agency. The Agency would receive contributions from national governments to cover future interest payments. The debt would clearly not be eliminated," the paper said.

"However, the fact that it will be intermediated by the European Agency will produce a reduction in the debt burden, given that the Agency will be able to issue debt at more favourable conditions than highly indebted countries," it said.

Germany has long been strongly opposed to joint debt issuance in the EU, citing EU treaties, its own constitution and concerns about assuming the responsibility for other countries' debts.

The coalition agreement of the new German government makes clear that joint borrowing for the recovery fund was a one-off. The Netherlands, Finland and Austria also oppose the idea of more permanent joint debt issuance.

The paper referred to by the joint Macron-Draghi article said the EU debt agency could buy the debt created during the 2020-2021 pandemic gradually over five years.

"The Agency would pay for the sovereign bonds acquired with newly-issued Agency bonds, using reference market prices for EU bonds of similar maturities. After the Agency bonds reach maturity, the Agency will refinance them on the market," the paper said.