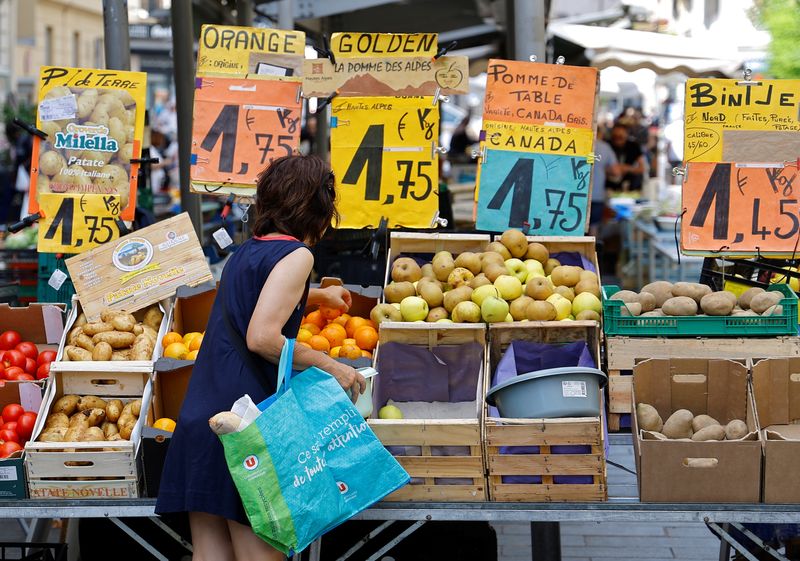 © Reuters. Price tags are seen as a woman shops at a local market in Nice, France, June 7, 2022. REUTERS/Eric Gaillard

PARIS (Reuters) - The French economy will slow sharply next year in the face of Europe's energy crisis, with a risk of a "limited and temporary" recession in the worst-case scenario, the central bank said on Thursday.

The euro zone's second-biggest economy is on course for an expansion this year of 2.6% but growth will slow to 0.5% in 2023, the Bank of France said, under its reference scenario based on recent oil and gas futures prices.

But the high uncertainty around energy supplies and prices and an expected slowdown this winter meant the central bank preferred to flag a range for economic growth next year of between +0.8% and -0.5%, it said in its quarterly outlook.

"If a recession must happen, it will be limited and temporary with a sharp rebound in 2024," central bank governor Francois Villeroy de Galhau said in an interview with La Croix newspaper.

Looking further out, the central bank forecast on Thursday that growth would recover as energy market tensions subside, to reach 1.8% in 2024.

The central bank saw inflation reaching 5.8% on average this year and in a range between 4.2% and 6.9% in 2023 depending on energy markets, before easing back to 2.7% in 2024. The European Central bank targets medium-term inflation of 2%.

"We are firmly committed to bringing inflation back down towards 2% in the next two-to-three years," Villeroy said.