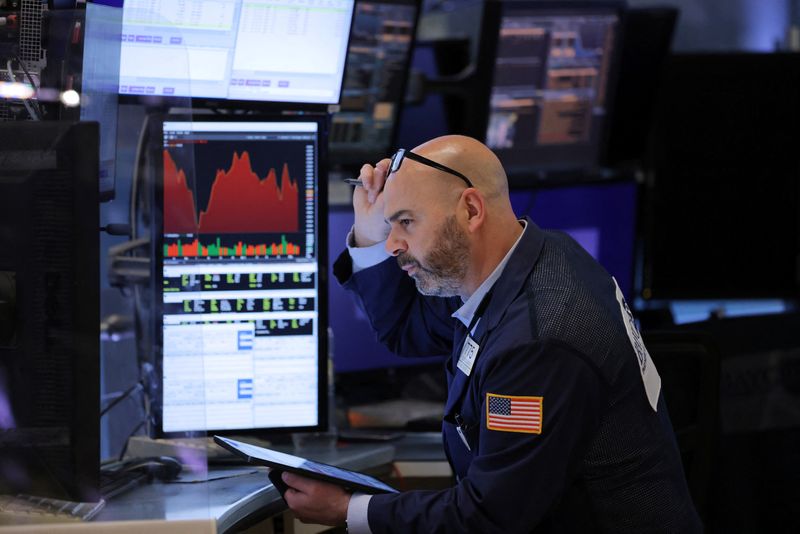 (Reuters) - U.S. stock index futures edged lower on Friday as sentiment remained fragile after a sharp selloff on Wall Street in the previous session, with investors awaiting April jobs data that could throw light on the path of interest rate hikes.

Unemployment rate dropped to its pre-pandemic low of 3.5% in April, the report is also likely to show, while wages rose solidly, underscoring the challenge the Federal Reserve faces to curb high inflation.

The main indexes plunged on Thursday, reversing all gains from a relief rally on Wednesday, as investors feared bigger rate hikes might be needed to tame inflation running at a four-decade high. Traders see 78% chance of a 75 basis point hike at the Fed's June meeting, despite Fed chief Jerome Powell ruling out such a rate hike in the next meeting.[IRPR]

The Nasdaq tumbled 5%, its biggest one-day percentage decline since June 2020, as rate-sensitive growth stocks were hammered.

"For the market to find a real bottom, it needs some signs that inflation is starting to cool off first," said Marios Hadjikyriacos, senior investment analyst at forex broker XM.

"This puts additional emphasis on the upcoming US employment report, particularly on the wage growth component that is considered an early indicator of 'organic' inflationary pressures."

The S&P 500 growth index is down nearly 20.3% year-to-date as compared to a 4.9% fall in its value counterpart, which houses economy-sensitive sectors like energy, banks and industrials.

Megacap stocks were mixed on Friday, with Microsoft Corp (NASDAQ:MSFT) down 0.6% in premarket trading.

Investors continued to pull out capital from equity funds leading up to the Fed's May 4 meeting, a BofA report citing EPFR data showed, with U.S. equities suffering a fourth week of outflows with $2.1 billion lost.