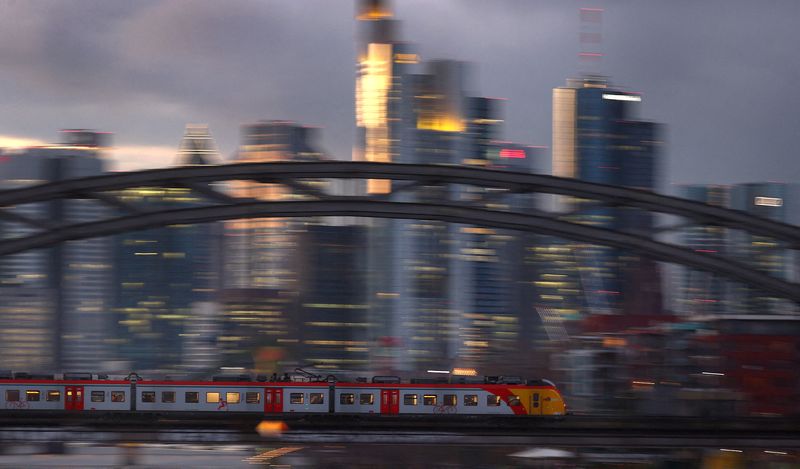 © Reuters. FILE PHOTO: A commuter train passes the skyline in a slow shutter speed photograph as the spread of the coronavirus disease (COVID-19) continues and the country faces new restrictions to control the pandemic in Frankfurt, Germany, December 2, 2021. REUTE

BERLIN (Reuters) - German annual inflation slowed in December for the first time in six months, but remained well above the European Central Bank's price stability target of 2% for the euro zone as a whole, preliminary data showed on Thursday.

The national consumer price index (CPI) rose by 5.3% year-on-year, the highest reading since June 1992 and a further acceleration in price pressures after an inflation rate of 5.2% in November.

The Statistics Office said there were a number of factors driving the unusually high inflation rates since July 2021, including base effects due to low prices in 2020 when the economy plunged due to the first coronavirus wave.

"In this context, especially the temporary value-added tax (VAT) reduction and the sharp decline in mineral oil product prices have had an upward effect on the current overall inflation rate," the office said.

"Apart from the usual market developments, additional factors are the introduction of CO2 pricing as of January 2021 and crisis-related effects such as marked price increases at upstream stages in the economic process."

German government officials and policymakers at the central bank expect inflation to ease further in the coming months as transitory effects, such as the temporary VAT cut, should wane from January onwards.

"It is true that inflation should fall after the turn of the year, partly due to special factors," Commerzbank (DE:CBKG) analyst Joerg Kraemer said.

"But the inflation risks are clearly pointing upward - not only for Germany but also for the euro zone. It's time for the ECB to take its foot off the gas."