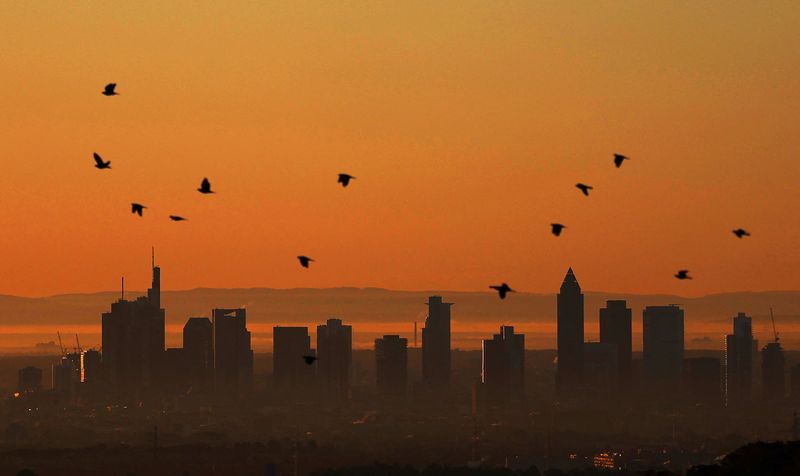 © Reuters. FILE PHOTO: Birds are seen over the skyline as the sun rises in Frankfurt, Germany, September 22, 2022. REUTERS/Kai Pfaffenbach

BERLIN (Reuters) -German inflation eased for a second month in a row in December due to falling energy prices and the government's one-off payment of household energy bills, coming in below expectations even as analysts warn that a continued slowdown is not a given.

German consumer prices, harmonised to compare with other European Union countries, rose by 9.6% on the year in December, preliminary data from the Federal Statistics Office showed on Tuesday. Analysts polled by Reuters predicted December's annual inflation would rise by 10.7%.

October saw the highest reading since comparable data going back to 1996, with harmonized inflation up 11.6% on the year. November saw a slight easing, with an increase of 11.3%.

Compared with November, prices decreased by 1.2%. Analysts had expected a fall of 0.5% on the previous month.

The annual increase has been driven primarily by higher food and energy costs due to the war in Ukraine.

Energy prices eased somewhat in December but were still up 24.4% compared with the same period last year, while food prices had increased by 20.7%, according to the office.

A one-off payment for household energy bills in December, part of government efforts to shield consumers, had a downward effect on prices, according to the statistics office.