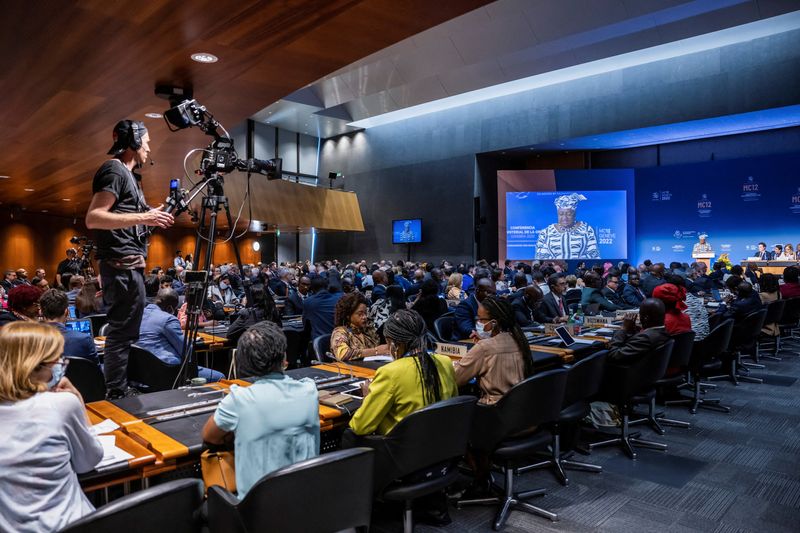 GENEVA (Reuters) - Negotiations at the World Trade Organization aimed at clinching deals on food security, fishing and vaccines entered their final hours on Thursday after all-night talks, with some trade sources hopeful that efforts to circumvent Indian opposition would succeed.

Ministers from more than 100 countries are meeting at the global trade watchdog's headquarters in Geneva this week for the first time in more than four years to thrash out new trade rules - a feat many doubt in an era of high geopolitical tensions.

The body's 164 members must all agree for new global trade rules to be passed, meaning that one member can block deals.

In this week's June 12-15 meeting prolonged until Thursday afternoon, that member has been India. New Delhi, which has a history of blocking multilateral negotiations, has stuck to long-held demands to maintain subsidies for fisheries and agriculture and pushed for extra carve-outs, trade sources say.

"India is strongly representing its perspective at the WTO

to protect the future of every Indian and that of the marginalized," he said on Twitter (NYSE:TWTR).

For a Factbox on the WTO negotiations see here:

However, sources close to the discussions were more upbeat on Thursday morning and said a package of deals with trade offs across the topics was possible. "It's looking better but it's too early to say whether it falls into place or falls apart," said a WTO delegate.

Negotiators including U.S. Trade Representative Katherine Tai were involved in talks in the so-called 'Green Room' of the WTO most of the night trying to thrash out agreements. She tweeted a photo of Lake Geneva at sunrise without providing an update on the talks. Negotiations resumed around 0700 GMT and are ongoing, trade sources said.

One of the possible outcomes of the talks is a pared-back version of a deal designed to curb fishing subsidies that cause over-fishing, a document seen by Reuters showed. Another is a waiver of intellectual property rights for COVID-19 vaccines and pledges to ease the food security crisis.

WTO officials have maintained throughout the meetings that deals can be reached, saying that talks often look hopeless until a final bargain comes together.

"We are still hopeful for an outcome," said WTO spokesperson Daniel Pruzin.

Observers expressed frustration with the process.

"The ministerial (conference) laid bare the increasing dysfunction that inhibits collective action at the WTO," said Jake Colvin, president of the National Foreign Trade Council, adding that members should not reward "obstructionism".