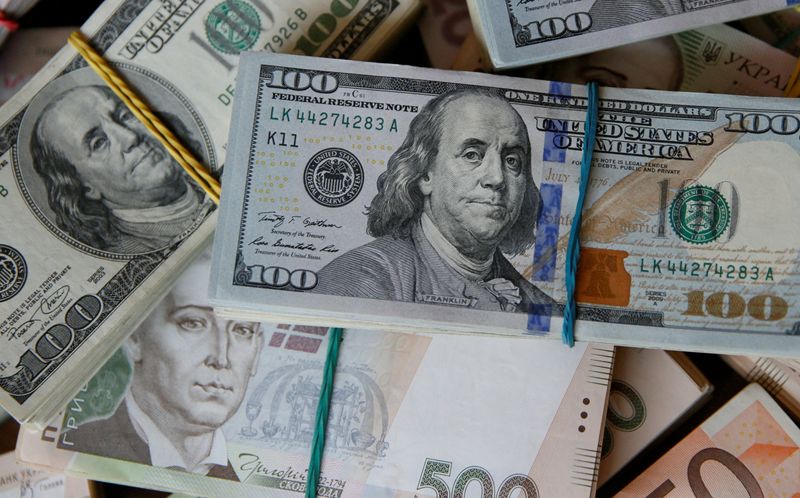 SINGAPORE (Reuters) - The dollar wobbled around just below multi-decade peaks on Tuesday, as traders waited on a rate hike from the U.S. Federal Reserve and for any clues about whether hints of a slowing economy will prompt a shift away from its focus on inflation.

The euro inched up to $1.0235 but was hemmed in by uncertainty over Europe's energy security which is not helped by a looming cut in the westbound flow of Russian gas.

The Fed concludes a two-day meeting on Wednesday. Traders have been dialling back expectations as markets try and figure out if or when policymakers might pause their inflation-fighting efforts because there are signs the economy is starting to slow.

"I don't think the market's got a very good, confident feel that it's going to be one flavour of surprise or the other," said Imre Speizer, an analyst at Westpac in Auckland.

"Which is enough to hold the dollar in place."

The U.S. dollar index was slightly lower at 106.320, but not too far below a 20-year high of 109.290 hit in mid July, as the greenback draws strength both from the expectation of U.S. rate rises and as a safe bet in a global slowdown.

A profit warning from Walmart (NYSE:WMT) on Monday, which said customers were tightening their belts, was the latest sign that the going is getting tough, coming on the heels of a handful of softer-than-expected U.S. and European data prints.

The Australian and New Zealand dollars eked small gains overnight but progress was capped. The Aussie at $0.6959, was just below its 50-day moving average as traders waited for Wednesday's inflation data release.

Headline consumer prices are seen galloping at 6.2% year-on-year, the fastest pace in more than three decades.

"There may be some slight upside for the Aussie, depending on the data," said analysts at ANZ Bank.

"A 50bp hike from the (Reserve Bank of Australia) next week is all but a foregone conclusion – the main risk is for a larger hike," they said.

"But this would require a very, very high CPI number, given that the RBA has more flexibility with its monthly meetings."

A 50 bp hike is also seen as the most likely move from the Bank of England next week, though it is barely lending support to sterling. The pound inched 0.1% higher on Tuesday to $1.2065.