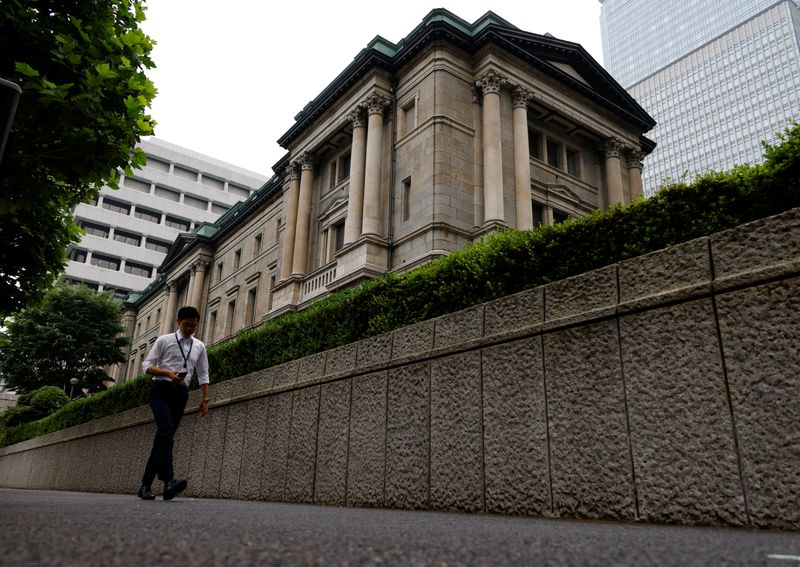 TOKYO (Reuters) - Worries over a global slowdown are casting a shadow over Asia's recovery prospects with factory activity growth slowing in Japan and Australia, keeping pressure on policymakers to support their economies while tightening monetary policy to combat inflation.

Japan's manufacturing activity grew at the slowest pace in 10 months in July, the purchasing managers' index (PMI) survey showed on Friday, boding ill for an economy struggling to shake the wounds from the pandemic.

Factory activity also slowed in Australia with the index falling to 55.7 in July from 56.2 in June, a separate survey showed on Friday.

The surveys underscore the hit manufacturers are suffering from supply constraints, rising raw material costs and slowing global demand - all factors flagged by the Bank of Japan as among key risks to the country's economic recovery.

"July's PMIs suggest that the manufacturing sector is slowing as demand weakens, while the latest COVID-19 is starting to hit the services sector," Marcel Thieliant, senior Japan economist at Capital Economics, said on Japan's PMI.

"While that index never dropped as far as in other advanced economies, it is not showing the strong improvement seen elsewhere either."

PMI surveys for Britain, euro zone and the United States are due out later on Friday.

Soaring inflation, driven by Russia's war in Ukraine, has forced central banks across the globe to tighten monetary policy even at the cost of cooling their economies.

Despite suffering the economic pain from the Ukraine war, the European Central Bank raised interest rates for the first time in 11 years on Thursday as concerns about runaway inflation trumped worries about growth.

Aggressive rate hike plans by the Federal Reserve have stoked market worries over a U.S. recession. Many Asian central banks also found themselves scrambling to catch up tightening policy to tame inflation and keep their currencies from depreciating too much.

China and Japan remain exceptions by keeping monetary policy loose, a sign their economies - the second- and third-largest in the world - lack strength to offset the weaknesses in other parts of the globe.

The slowdown in the world's second-largest economy, as well as the fallout from aggressive central bank tightening, forced the Asian Development Bank (ADB) to slash its growth forecast for the region on Thursday.