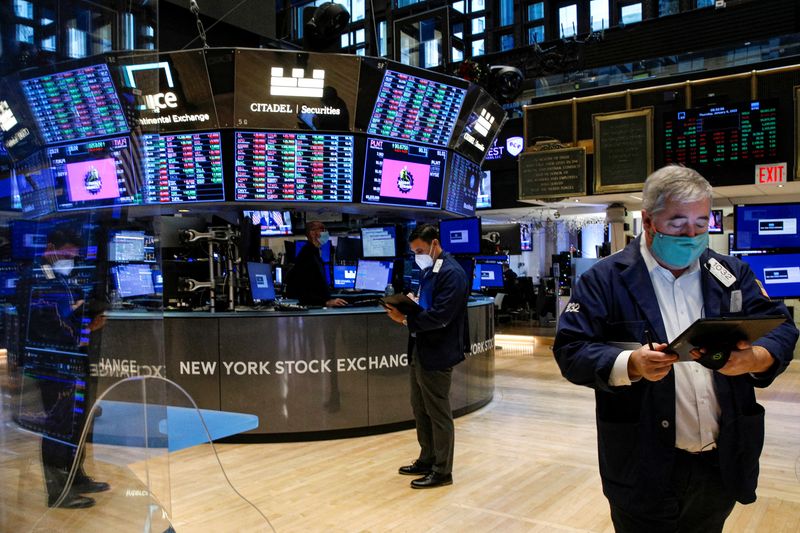 NEW YORK (Reuters) - Investors are recalibrating their portfolios to account for a more hawkish Federal Reserve, as signs that the central bank is ready to pull out the stops in its fight against inflation has shaken up markets in the first week of 2022.

Yields on the benchmark 10-year U.S. Treasury are on track for their biggest weekly gain since September, 2019, while technology and growth stocks have tumbled and investors snapped up shares of banks, energy firms and other economically sensitive companies.

The action is broadly reminiscent of how markets started 2021, when the rollout of vaccines for the coronavirus boosted expectations of a U.S. economic reopening. Yields slipped later in the year while the rally in economically sensitive shares slowed and investors returned to the big technology and growth stocks that have led markets higher for the last decade.

This time around, investors must factor in a Fed that is expected to raise rates at least three times this year as it battles surging consumer prices. This could weigh on tech and growth stocks, as higher borrowing costs could erode their future earnings. The S&P 500 Value index has gained around 1% for the year to date, while the S&P 500 Growth index has fallen around 4%. The broader index was recently down around 1.7% for the year.

Bob Leininger, a portfolio manager at Gabelli Funds, expects that trend to continue and is focusing more of his portfolio on financials, energy, and aviation stocks such as Boeing (NYSE:BA) Co in anticipation of a broad resurgence in global travel.

"The Fed is serious about ending quantitative easing," he said. "This is the year that we will start to see quantitative tightening and that will favor value stocks."

While investors typically view a hawkish Fed with caution, equities have nevertheless tended to rise during past rate-hike cycles. The S&P 500 has risen at an average annualized rate of 9% during the 12 such cycles since the 1950s and showed positive returns in 11 of those instances, according to data from Truist Advisory Services.

Expectations that the Fed will raise interest rates at least three times in 2022 will "cut down on speculation" in the market, said Lew Altfest, chief executive of Altfest Personal Wealth Management.

That will likely weigh on both deep value-oriented sectors like travel and energy that saw outsized gains in 2021, while at the same time hurting high-growth technology shares, he said.

Altfest is focusing on companies such as banks, which he expects to benefit from higher interest rates and trade at comparatively lower valuations, while also maintaining positions in giant technology-focused companies.

Investors will get a closer look at bank earnings in the week ahead as several large banks, including JPMorgan (NYSE:JPM) and Citigroup (NYSE:C), are expected to release their quarterly results.

Some believe the heavy weighting of tech-focused stocks in the S&P 500 could slow the broader index if those names stumbled: Microsoft (NASDAQ:MSFT), Apple (NASDAQ:AAPL), Nvidia (NASDAQ:NVDA), Alphabet (NASDAQ:GOOGL), and Tesla (NASDAQ:TSLA) accounted for nearly a third of the S&P 500’s almost 29% total return last year, according to data from UBS Global Wealth Management.

Though many of the big tech stocks have gotten hit in recent days, the pain has been much worse in smaller tech names that rallied during the early stages of the pandemic. The ARKK Innovation ETF, which was the best performing equity fund of 2020, is already down some 11% year-to-date.

Others, however, are betting investors will inevitably return to tech stocks, which have handily outperformed other parts of the market for years.

Ross Frankenfield, managing director at Harbor Capital Advisors, has beefed up his allocation to larger cap financials but expects momentum to shift back to mega-cap tech stocks later in the year as it becomes clear that economic growth will stagnate in 2023.

"There is a good near-term case for value stocks, but over the long run we think there will be a tailwind for mega-cap growth stocks again once earnings are harder to come by," he said.