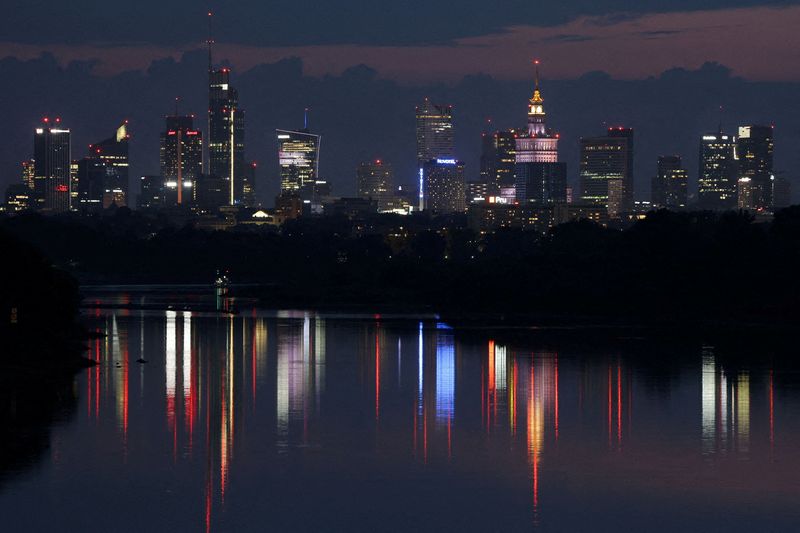 © Reuters. FILE PHOTO: A skyline of skyscrapers is reflected in the Vistula river in the evening in Warsaw, Poland August 22, 2022. REUTERS/Kacper Pempel

(Reuters) - Hedge funds trading Eastern European stocks and bonds are seeing their worst performance in eight years, weakened by the surge of global inflation, the strength of the U.S. dollar and the war in Ukraine, the BarclayHedge Eastern European index shows.

The index, which tracks the performance of hedge funds trading stocks and bonds in the region, has dropped by 22.65% from the start of 2022 to the end of August, the index compiled by the data provider BarclayHedge shows.

This puts it on track for its worst performance since 2014.

Another index by the same data provider, which follows fund managers trading only stocks in Eastern Europe, is down even further, by almost 32% over the same time period.

An MSCI EM Eastern Europe ex-Russia index that trades in euros is down just over 30% year-to-date, underperforming wider emerging market equities as well as global stocks benchmarks. The MSCI International EM Price Index is down 22% and the MSCI All Country World Price Index is down 20%.

The dollar's surge to 20-year highs in the face of soaring inflation and aggressive rate hikes from the Federal Reserve have caused pain across the world. It draws funds back to U.S. assets and pushes up the cost of imports as local currencies weaken against the dollar.

"There’s a difficult combination of factors occurring in that part of the world right now," said Ben Crawford, vice president of research at BarclayHedge. "The smallest threat that the war might cross into the other Baltic states makes investors nervous to take on exposure to these markets."

Since the outbreak of war in Ukraine, the number of funds BarclayHedge tracks in the region has fallen to just 15 from 43 since the start of the year, the data provider said.

One portfolio manager at a fund with over $100 billion under management said the stock prices of companies in Eastern Europe stood no chance against the rise in the dollar.

Stock prices tumbled across Europe on Wednesday after higher-than-expected U.S. inflation this week foreshadowed another significant rate hike by the Federal Reserve.