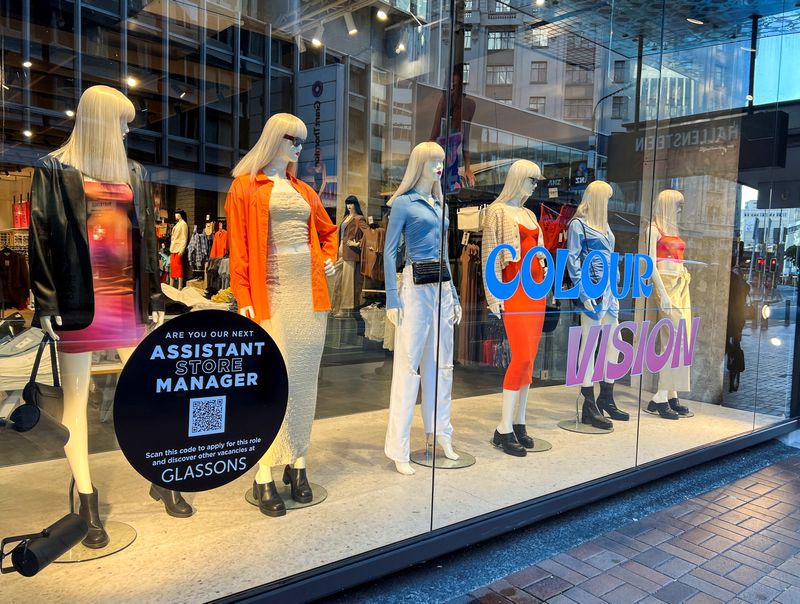 © Reuters. A sign advertising staff requirement is displayed on a store window at Lambton Quay, as the country experiences near record low unemployment, in Wellington, New Zealand August 3, 2022. REUTERS/Lucy Craymer

The company, which is behind such mobile game apps as Clusterduck and Into the Dead, bought a studio in Medellin, Colombia, in February, increasing its staff of 180 by 35.

"It's incredibly difficult to get to people with experience," said Mario Wynands, managing director of PikPok. "By acquiring the studio in Colombia, that's given us the opportunity to recruit talent from Latin America and scale up that way."

Other industries do not have that solution. Businesses from farms to retirement villages and hotels are scrambling to find workers - and competitively pushing up wages as they do, increasing the central bank's challenge in fighting inflation.

In many cases, activity is simply disrupted by a lack of people - exacerbated by suspension of immigration in the pandemic and, now, the slowness of its revival.

The unemployment rate was just 3.3% in the second quarter. Wages in the quarter were 3.4% higher than a year earlier, rising at the fastest rate in 14 years.

The aged-care sector had only 78% of the 5,000 registered nurses it needed, said Rhonda Sheriff, co-owner of Chatswood Retirement Village and clinical advisor to the NZ Aged Care Association. As a result, there are aged-care beds throughout the country that cannot be used, she said.

Her solution is higher pay. The government should pay nurses in aged care as much as it paid those in public hospitals, she said.

The meat processing sector has been raising concerns about labour shortages for months. According to the Meat Industry Association, the sector has 23,000 staff but needs 25,000.

At peak times, not all carcasses could be processed on time, and plants could not run at capacity, it said.

Willie Wiese, general manager manufacturing at red meat co-operative Alliance, said this year his staff had gone to help in processing plants because of the shortages.

New Zealand's nursing and agricultural industries have long relied on immigrant labour, the supply of which dried up when the country closed its border during the pandemic.

In 2021, the government said it was simplifying immigration, but it also made changes that raised barriers to low-wage migrants. The immigration minister at the time said this was to help transition the country to a higher-wage, higher-skill economy.

Borders were reopened partially in February and fully this week, but New Zealanders are also leaving for other countries, especially Australia. Wynands and Sheriff both said they were losing staff to overseas employers offering higher pay.

Economists do not expect to see net immigration until next year, because recruiting foreign workers, getting visas for them and moving them into the country takes time.

That leaves challenges for now. Dairy farmer Richard McIntyre, the spokesman for farming lobby group Federated Farmers, said his industry had been short staffed for a year. Farmers had to work longer hours, and some jobs, such as pasture management, were being missed.

"The real difficulty is if I attract someone on to my farm, there are only so many people and I'm really just taking a staffer off someone else and that creates a problem for them," he said.