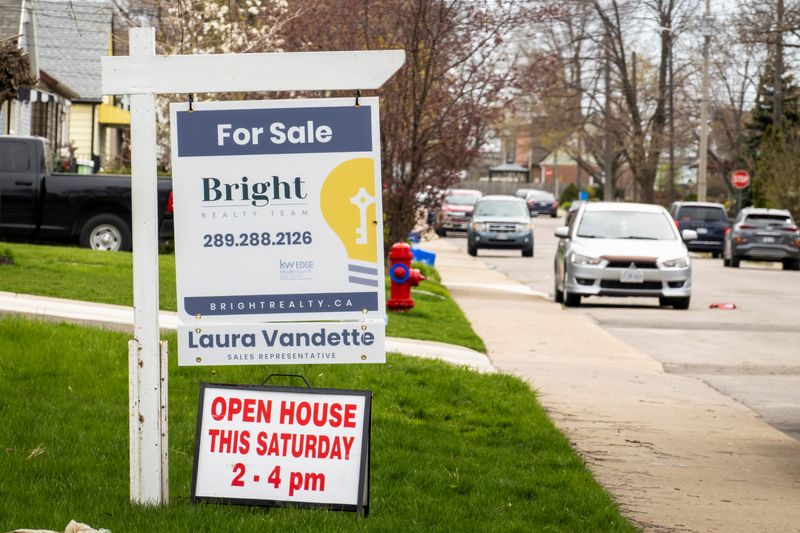 © Reuters. A home for sale on Emerald Street in Hamilton Ontario, Canada May 6, 2022. REUTERS/Carlos Osorio

The Bank of Canada has signaled its historic tightening campaign is nearing an end, though economists expect the central bank's policy rate to remain at a 15-year high of 4.25% or 4.5% throughout 2023, putting downward pressure on prices.

At the same time, Canada needs to build 3.5 million more homes by 2030, according to the country's national housing agency, to address a current shortage as well as rising demand from millennials and newcomers to the country as the government boosts immigration targets.

"We do have quite a bit of fundamental demand still out there ... but the market just can't clear at current prices because of where interest rates have gone," said Robert Kavcic, senior economist at BMO Capital Markets.

"Prices have to adjust and it's taking time."

BMO forecasts a 20% decline in home prices, peak to trough. They are already down 10% from February's peak, after falling 1.2% in October from September, Canadian Real Estate Association (CREA) data showed on Tuesday.

Home sales edged up in October, suggesting buyers and sellers "will likely continue coming off the sidelines" moving into 2023, CREA Chair Jill Oudil said in a statement.

But she cautioned it will be a far cry from the boom triggered by the COVID-19 pandemic, when prices soared 52.4% in the two years to February 2022 as record-low interest rates, the desire for more space, and speculation set the market on fire.

The Bank of Canada has increased its policy rate by 350 basis points since March to the current 3.75%, making borrowing more expensive, and is widely expected to hike again in December.

"It's scary for someone that's looking to buy," said Victor Tran, a mortgage expert with online broker Ratesdotca. Variable rate mortgages - home loans in which the interest rate fluctuates based on market conditions - have more than tripled since March, with strict stress tests making qualification even tougher.

Peggy Hill, who runs a real estate firm in Barrie, Ontario, has had many first-time buyers throw in the towel on a purchase because the monthly payments on a typical home in the city, about 110 km (68 miles) from Toronto, would simply be too high.

"We killed our first-time buyers," she said. "They're gone ... they cannot afford to service that debt."

And it's not just the resale market feeling the pinch. Toronto-area condo presales plunged 79% in the third quarter, according to data from Urbanation, with 189 projects reporting zero sales in the quarter.

"You can tell there's been a pretty big deterioration in market confidence, particularly amongst investors," said Shaun Hildebrand, president of the Toronto-based real estate data consulting firm, adding that investors own about 70% of condo units under construction in the region.

"If investors aren't interested in buying condos, the whole market starts to slow down," he said.

Adding to the pressure, a record 30,000 condo units are set to be completed next year. But far higher mortgage rates mean some owners may not qualify and they could be forced to sell their units, leading to a flood of listings, experts said.

At the same time, more sellers than ever are waiting it out in hopes that spring will bring a boom in demand and rising prices, Hill said.

"They're all banking on things just changing magically. And I don't see it," she said.