How the other half lives: luxury companies thrive 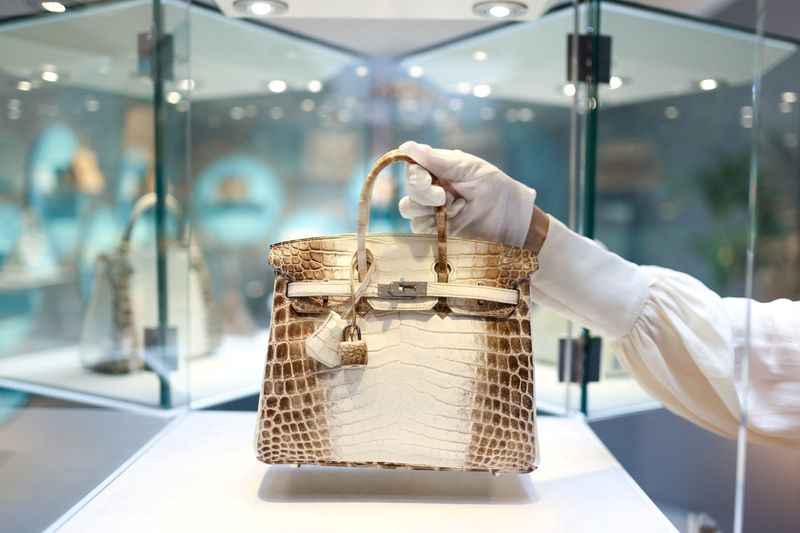 LONDON/PARIS (Reuters) - While millions are fretting whether they can afford another $1,000 on energy this year, others are still splashing out on $10,000 Hermes handbags as soaring prices leave wealthier people relatively unscathed.

A string of consumer companies, from spirits group Diageo (LON:DGE) to Birkin bag maker Hermes, have this week reported they're making money from their most expensive products and expect to continue to do so, despite a cost of living crisis that shows no signs of abating.

Sharply higher interest rates, surging inflation and a prolonged energy crisis are leading to the conclusion that the global economy is headed towards recession.

But millions of wealthier consumers are still sitting on a cushion of savings built up during the COVID-19 pandemic and keen to treat themselves after two years of restrictions.

Hermes reported a record quarterly profit margin on Friday, as sales rose sharply amid strong growth in Europe and the United States, and a rebound in China in June.

Chairman Axel Dumas said he saw no sign of a slowdown in any region, even though the company has raised prices 4% this year.

Carmaker Renault (EPA:RENA) also said its turnaround strategy of focusing on selling fewer but more profitable cars was paying off, and upgraded its forecast for full-year margins. The most expensive Renault cars can cost over $100,000.

"The surprising resilience of European consumers can also be seen in the strong results of luxury brands owner, Louis Vuitton, particularly in their fashion and leather goods, such as Fendi and Christian Dior," Rebecca Chesworth, senior equities strategist at investor State Street (NYSE:STT) SPDR ETFs, said.

"Consumers enjoying travel reopening have been boosting sales of wines and spirits."

COME FLY WITH ME

Many consumers are bracing for the economy to deteriorate rapidly this winter.

In Britain, for example, a price cap on typical household energy bills is expected to jump from 1,277 pounds ($1,552)earlier this year to more than 3,500 pounds by October, while the cost of food has leapt by 10% year-on-year.

That will plunge hundreds of thousands into financial jeopardy, unable to spend on anything but the absolute basics.

Food and personal goods companies such as Nestle and Unilever (NYSE:UL) have been locked in hard negotiations with retailers since late last year, with supermarkets reluctant to raise prices of basic necessities and risk alienating shoppers struggling to get by.

"Not all companies can (raise prices), only companies that have pricing power that are doing relatively well - that have the dominant positions in their respective sectors - will be able to do that," BlackRock (NYSE:BLK) Investment Institute's global chief investment strategist Wei Li told Reuters. "Focusing on the quality players within the sector is important."

While wealthier consumers' savings are still being eroded by inflation, they currently seem focused on enjoying the freedoms that have returned with the easing of COVID-19 restrictions.

British Airways-owner IAG (LON:ICAG) on Friday returned to profit for the first time since the pandemic, as more people flew around Europe between April and June.

IAG sales, on trips mostly booked out of Britain, Spain and the United States, more than quadrupled to 9.35 billion euros ($9.55 billion) in the first half of the year versus last year.

To be sure, Menezes cautioned: "To get back to where we were, it's probably another two years, maybe a bit longer."

Europe's lenders this week also offered some positive surprises on profits, but investors are watching for signs a weaker economy, surging inflation and the war in Ukraine could hit their prospects.

Euro zone inflation rose to another record high in July and its peak could still be months away, keeping pressure on the European Central Bank to opt for another big interest rate increase in September.