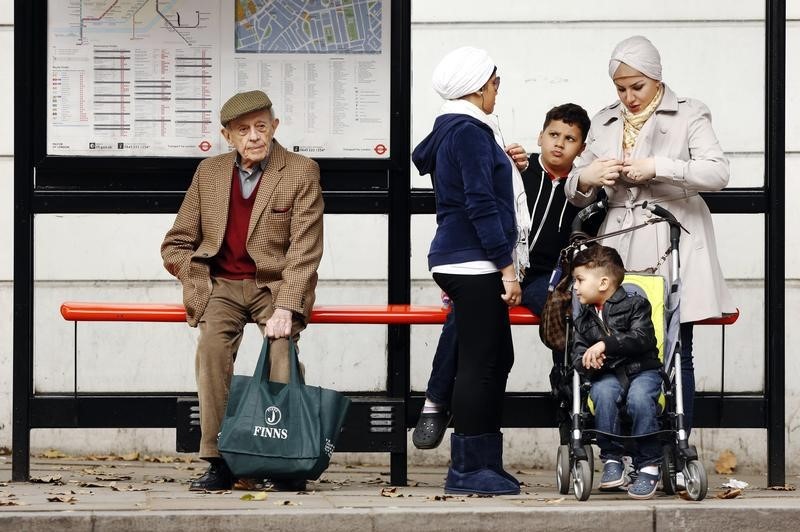 BURNLEY, England (Reuters) - Skipping lunch each day and watching television in blankets to keep warm is not how Ann and Keith Hartley envisaged their retirement in Burnley, the northern English town hit hardest by Britain's cost of living crisis.

Now in their 70s, the Hartleys are even rationing cups of tea in the face of soaring energy bills, driven higher by the Ukraine war, and double-digit inflation in the shops.

While millions in Britain face a difficult winter, the Centre for Cities think tank says the nearly 95,000 residents of Burnley are most exposed to the shockwaves ripping through the economy.

Burnley's rows of 19th Century terraced houses, built during the Industrial Revolution, are some of the most energy-inefficient homes in Britain.

People here also face the highest effective rate of inflation in mainland Britain, according to Centre for Cities, as they spend more of their income on essential goods which have seen the sharpest increases in prices.

Consumers in Burnley saw prices rise 11.7% in the year to September, the think tank estimates, compared with 10.1% nationally, and 9.1% in London.

With Britain sliding into what is expected to be a prolonged recession, Prime Minister Rishi Sunak's government will announce a raft of tax rises and spending cuts on Thursday that it says will ultimately deliver a quicker return to economic growth.

But few households are looking that far ahead. The Hartleys get by on a combined pension of just over 1,000 pounds ($1,173) a month.

"I don't know if it's because we're that much older, but we've both noticed it. It's terribly cold. We've cut it down to roughly two meals a day," said Ann Hartley, 71, a former personal assistant.

Other generations in Burnley are also feeling the screw tighten financially.

Wendy Pollard, 42, a self-employed bookseller and a mother of two, expressed shock that she was now paying for bread and milk out of savings built up to take her children on holiday.

"Who actually thought five years ago that you would be sitting, shivering on a settee with a hot water bottle, trying to work out the best and most efficient way of drying your washing?" she said.

Pollard's sense of disbelief is shared by many who struggle to reconcile Britain's status as the world's sixth-largest economy against the fact so many face destitution.

A chronic lack of investment in social services, regional inequalities and an unreliable train network - especially outside London - have added to a sense of malaise. Britain's exit from the European Union has so far failed to yield economic dividends for places like Burnley.

According to the Resolution Foundation think tank, the poorest fifth of households in Britain are now more than 20% worse off than their peers in France and Germany.

Opinion polls show that a large majority of Britons think the country is heading in the wrong direction - a major challenge for new premier Sunak, whose Conservative Party has led Britain since 2010.

Things are likely to get worse before they get better: the Bank of England predicts a lengthy downturn. Britain is the only Group of Seven economy yet to recover fully from the COVID slump.

Finance minister Jeremy Hunt has vowed to shield the poor and balance spending cuts with tax rises, but that is scant comfort for local government officials like Afrasiab Anwar, an opposition Labour party politician who leads Burnley Council.

"The only thing that we've seen increase under this government is the number of foodbanks," Anwar said of centres where food parcels are given out to those in need.

Central government funding for Burnley has fallen by 5 million pounds a year since 2013/14, a cut of around a third. Any further reduction would hit core services, Anwar said.

He said government cuts to programmes that could have improved housing stock in the last decade would have made a big difference this winter.

"I don't think it's right that charities, the voluntary sector, the community sector, faith sector are having to do some of the things that they are doing," Anwar said.

In some parts of Burnley, 50% of children live in absolute poverty - defined as households with income below 60% of inflation-adjusted median income in 2010/11, House of Commons Library data shows.

Adrian Pabst, at the National Institute of Economic and Social Research think tank, said the cost of supporting the poorest households did not have to be big.

A fund to help struggling homeowners with rising mortgage costs and a 25-pound-a-week ($29) increase in welfare payments - which would keep 250,000 people out of destitution - would cost 4.7 billion pounds or 0.2% of economic output.

"It seems extraordinary to suggest that this country cannot afford 0.2% of GDP to help the most vulnerable," Pabst said.

"Our society is not working. It's broken. It's clear, it's completely broken," he said.

"We have people who live in this area where a day out is a is a trip to (supermarket) Tesco (OTC:TSCDY)."

Locals point to Burnley's strong community spirit as the key to getting through tough times. The presence of advanced manufacturers like Safran (EPA:SAF) SA also offers hope.

For Ann Hartley, who says she was given medication to help her cope, better days would simply mean being able to do things like going for a drive on a Sunday afternoon.

"We'd like to be able to be comfortable. Not rich, just comfortable," she said.