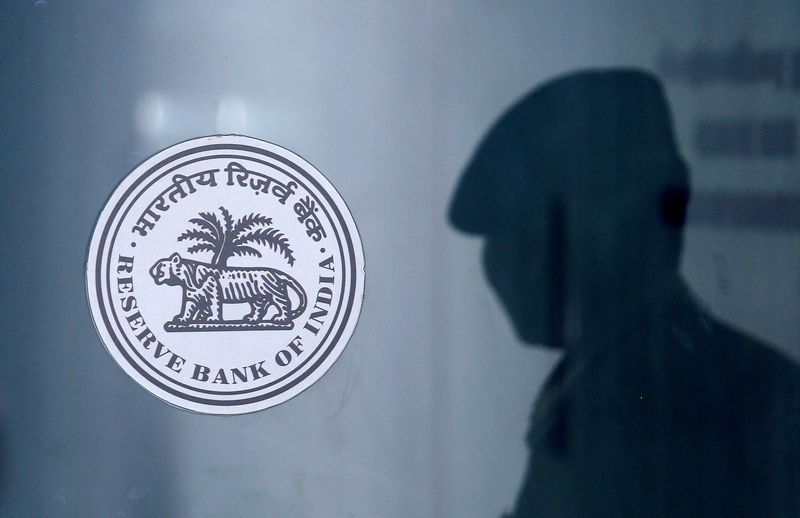 © Reuters. FILE PHOTO: A security guard's reflection is seen next to the logo of the Reserve Bank Of India (RBI) at the RBI headquarters in Mumbai, India, June 6, 2019. REUTERS/Francis Mascarenhas/File Photo

By Swati Bhat and Nupur Anand

MUMBAI (Reuters) -The Reserve Bank of India raised its key lending rate by 40 basis points to 4.40% on Wednesday to rein in rising inflation, catching markets by surprise with an unscheduled meeting of its monetary policy committee.

The central bank also raised banks' cash reserve ratio or proportion of deposits that banks need to set aside with the RBI as cash, by 50 basis points to 4.50% effective fortnight starting May 21, 2022.

Despite the tightening, the MPC also unanimously decided to retain an accommodative stance to support growth.

Governor Shaktikanta Das announced the first change in the repo rate, in two years in a virtual address to media.

"The MPC judged that the inflation outlook warrants an appropriate and timely response through resolute and calibrated steps, to ensure that the second-round effects of supply side shocks on the economy are contained and long-term inflation expectations are kept firmly anchored," Das said.

"The biggest contribution to overall macroeconomic and financial stability as well as sustainable growth would come from our effort to maintain price stability," he added.

The repo rate, the rate at which banks borrow from the RBI, was cut to a record low in May 2020, when the economy was reeling from the onset of the pandemic, and the rate was held unchanged at that level at an MPC meeting last month.

Most analysts had expected rates to be raised at the next scheduled meeting of the six-member panel on June 6-8, and this week's two-day meeting of the MPC caught financial markets unawares. The last time the RBI raised the repo rate was in August 2018.

India's 10-year benchmark bond yield jumped to 7.42%, highest level since May 2019, while the rupee strengthened against the dollar to 76.26.

Several traders said the RBI probably wanted to act ahead of the conclusion of a U.S. Federal Reserve meeting later in the global day. Many analysts expect the Fed to raise rates by 50 basis points.

India's retail inflation accelerated to nearly 7% year-on-year in March, its highest in 17 months and above the upper limit of RBI's 2-6% tolerance band for a third straight month. The RBI's medium term inflation target is 4%.

Das said the spike in inflation was largely due to the pressure on food prices, which were likely to remain high in the near term. April inflation data is due to be released next week.