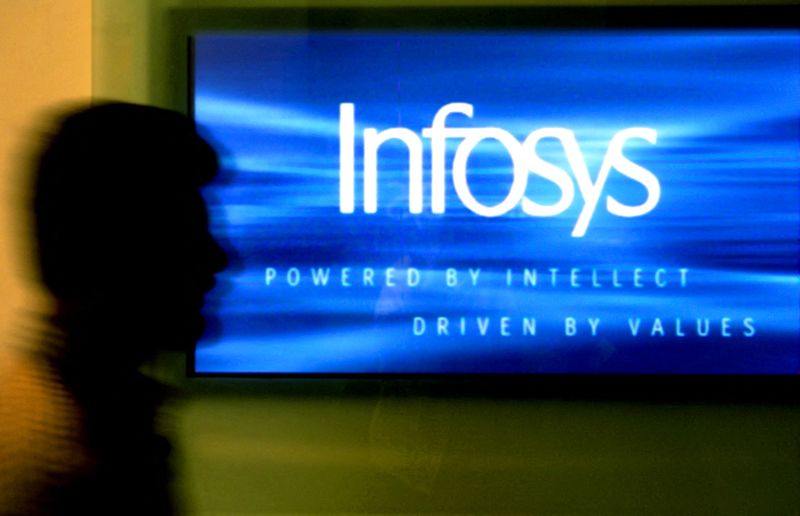 BENGALURU (Reuters) -India's Infosys (NYSE:INFY) Ltd on Wednesday bumped up its annual revenue forecast and posted a near 12% jump in quarterly profit, riding on strong demand for its software services from businesses accelerating their digital transformation due to the pandemic.

The country's second-largest IT services firm by revenue said it expects revenue growth of 19.5%-20% on a constant currency basis for the financial year to March, compared with the 16.5%-17.5% growth predicted in October.

"We expect the healthy technology spend to continue with large enterprises progressing on their digital transformations," Chief Executive Officer Salil Parekh said in a statement.

India's $194-billion IT industry has been a big beneficiary from the pandemic spurring global companies to bolster investments in services ranging from cloud-computing, digital payment infrastructure to cybersecurity.

Large deal signings for the third quarter were at $2.53 billion, a near 18% rise from the second, the company said.

Crosstown rival Wipro (NYSE:WIT) earlier on Wednesday reported a 30% rise in revenue for the December quarter and a near flat net profit, while the country's largest IT services firm, Tata Consultancy Services, is set to announce results later in the day.

Revenue rose to 318.67 billion rupees, with the banking, financial services and insurance unit, which accounts for over a third of the total, posting a 16.85% growth in the quarter.

The company's shares climbed over 50% in 2021, outperforming an about 31% jump for larger rival TCS.