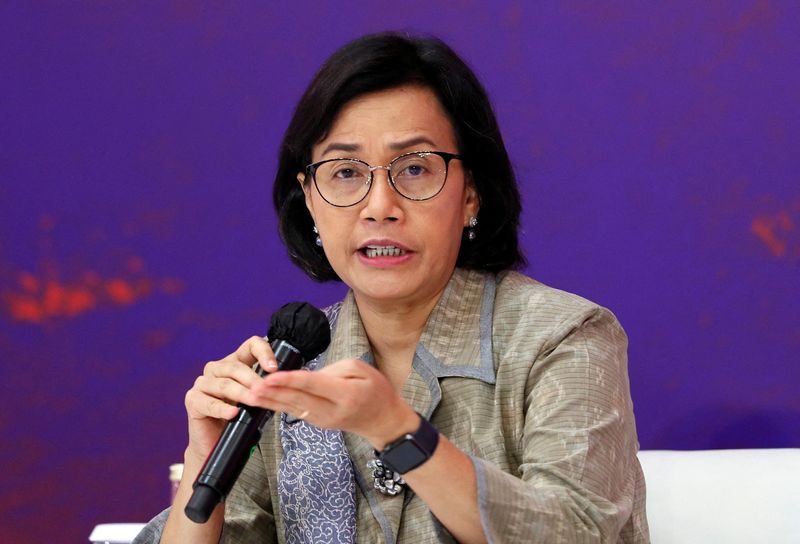 JAKARTA (Reuters) - Indonesia's finance minister on Monday told the nation's top bankers to be wary of risks to their balance sheets this year due to numerous global risks, including potential debt crises in some countries.

"The ups and downs, whether our economy is healthy or not really depend on the banking sector today, in 2023," Sri Mulyani said.

"So if I am guarding the state budget, please take care of your own banks well too," she said, urging bankers to think ahead and not to "continue to be constantly surprised" by global developments.

Southeast Asia's largest economy managed to maintain economic stability during an extraordinary year in 2022, she said, with economic growth expected to have remained resilient around 5% in the fourth quarter, following 5.7% growth in the third quarter.

Some other countries did not fare so well, Sri Mulyani said, predicting for this year "not only recession but the potential of debt crisis in countries where debt levels are very high".

She also warned of global division into geopolitical blocks reminiscent of the Cold War.

The Indonesian government would continue to maintain a flexible budget, including anticipating a potential revenue loss from moderating commodity prices, she said.

It did well last year, the minister added, citing a fiscal deficit of 2.4% of GDP, much smaller than planned, thanks to strong revenue collection from a commodity export boom.

Indonesia's banking sector is well capitalised with a capital adequacy ratio at 25.49% and a non-performing loan ratio at 2.65% as of November.

Its central bank last year raised interest rates by a total of 200 basis points and some economists expected further rate hikes this year to bring inflation back to within a 2-4% target. December inflation was 5.51%.