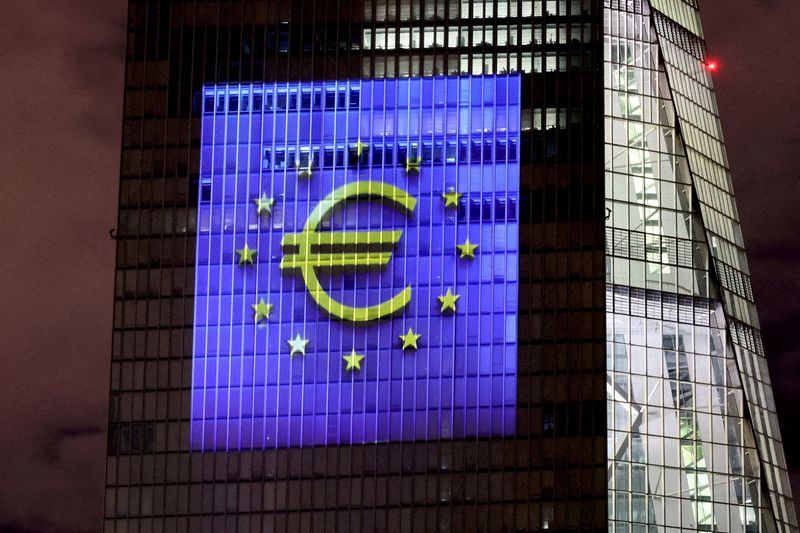 FRANKFURT (Reuters) - Climate shocks could quickly ripple through the euro zone economy as financial interlinkages amplified dangers and losses, a study by the European Central Bank and the EU's risk watchdog, the European Systemic Risk Board, said on Tuesday.

The ECB, which supervises the biggest banks in the 19-country euro zone, has for years argued that climate change is a top risk and has pushed lenders to acknowledge and reduce their exposures, but with little success so far.

"No meaningful reduction in emission intensity in the loan portfolios of euro area banks has taken place in recent years," the report said. Among banks, "exposures to climate-related losses also remain concentrated ..., with more than 20% of potential losses residing in the holdings of 5% of euro area banks."

Climate shocks will have an abrupt impact on market prices, initially hitting portfolios of investment funds, pension funds and insurance companies, according to the report. This sudden repricing will then lead to defaults and losses for lenders.

"In a disorderly transition scenario, marked by an immediate and substantial increase in carbon prices, respective market losses of insurers and investment funds could potentially amount to 3% and 25% (of) stress-tested assets in the near term," the report said.

These market dynamics could then amplify each other, because a climate risk could quickly reduce the value of assets and lead to fire sales. Financial institutions would dispose of a large number of exposed assets at distressed prices, leading to a downward spiral in valuations.

Beyond the corporate sector, households also appeared to be vulnerable, with almost half of outstanding home loans having been to made to borrowers who have high ratios of energy costs to income, the report added.

An orderly green transition, however, would reduce corporate defaults by up to a fifth in 2050, the report estimates.

While there are no regulatory instruments in place for such risks, systemic risk buffers or concentration thresholds to reduce exposure to carbon-intensive sectors could reduce dangers, the report adds.