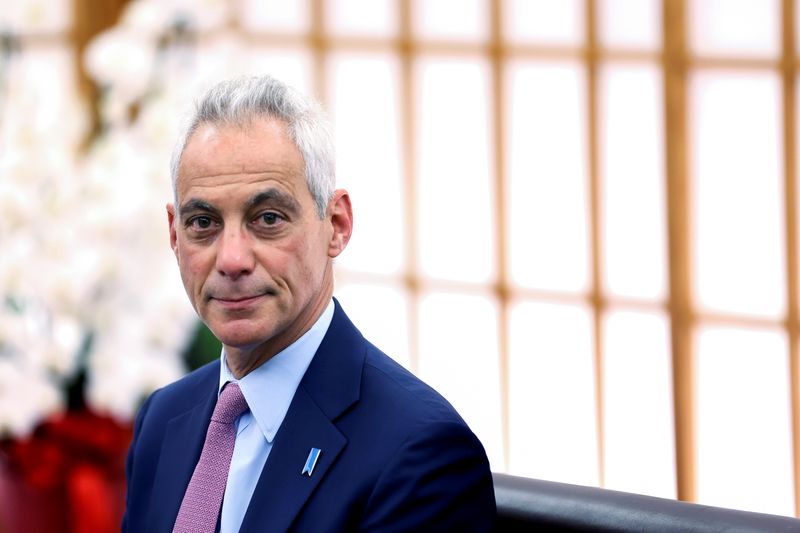 WASHINGTON/TOKYO (Reuters) - President Joe Biden's visit to Japan this month is expected to coincide with the formal launch of a new U.S. economic strategy for the Indo-Pacific, even as China seeks "very aggressively" to fill a void since Washington quit a regional trade pact, Tokyo's ambassador to the United States said on Monday.

Koji Tomita told a virtual event hosted by Washington's Center for Strategic and International Studies that Japan and the United States had been working on the details of the Indo-Pacific Economic Framework (IPEF), which, he said, needed to strike a balance between inclusivity and high standards.

Asian countries are keen to boost ties with the United States, but have been frustrated by its delay in detailing plans for economic engagement with the region since former President Donald Trump quit a regional trade pact in 2017.

Biden, who is due to visit South Korea and Japan from May 20 to May 24, announced the plan for IPEF last year. His administration's strategy for the Indo-Pacific region announced in February said the plan was to launch it in early 2022.

Tomita said Biden's visit would send a powerful signal that the United States remains focused on the Indo-Pacific in spite of the war in Ukraine.

"But this is not just a message. I think the visit will establish in very strong terms that Japan and the United States jointly are ready to play a leadership role in the economic and social development of the broader Indo-Pacific region," he said.

Tomita noted that Biden's visit would include a summit meeting of the Quad grouping of the United States, Japan, Australia and India, an important vehicle for that purpose.

"Also, I'm expecting the visit will also coincide with the formal launch of the Indo-Pacific Economic Framework initiative by the United States. And we are now trying to flesh out the ideas to be contained in this initiative," he added.

Tomita said the U.S. withdrawal from what is now known as the Comprehensive and Progressive Agreement for Trans-Pacific Partnership was a setback and China was "very aggressively seeking to fill this void."

"Whenever you do any form of regional economic forum there is a trade-off between inclusiveness and high standards," he said referring to IPEF. "Of course, we need both, but we have to strike the right balance between these two requirements."

The U.S. ambassador to Japan, Rahm Emanuel, told the same forum IPEF needed to be inclusive, but also have high enough standards that it wouldn’t be "a race to the bottom economically."

The Biden administration has ignored calls for a return to CPTPP because of concerns about the effect this could have on U.S. jobs and has frustrated smaller Asian countries by its unwillingness to offer greater market access they seek via IPEF.

Biden is due to host Southeast Asian leaders at a special summit in Washington on Thursday and Friday.