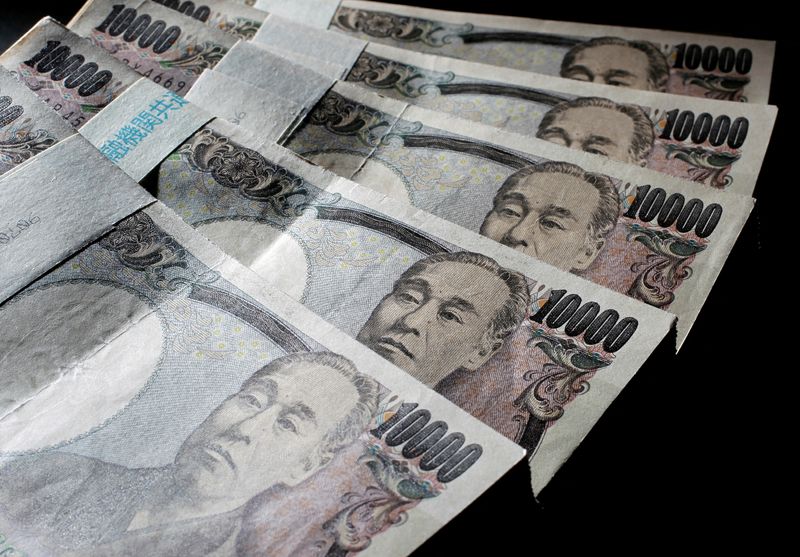 By Takaya Yamaguchi and Tetsushi Kajimoto

TOKYO (Reuters) - Japan has included measures to respond to currency moves as items for consideration in its fiscal 2023 budget to be drawn up late this year, the budget guideline showed on Friday, in a sign of a warning to investors against selling the yen.

It is rare for currencies to get a mention in the annual budget guideline so the inclusion underscores policymakers' concern about a rapid yen sell-off that has boosted living costs and hurt terms of trade, highlighted by trade deficits.

The guideline was approved by Prime Minister Fumio Kishida's cabinet on Friday.

"We will allow (ministries) to make request as appropriate to respond to currency swings," the government said in the guideline.

"We will promote economic and fiscal reform steadily, but that shouldn't narrow options for important policy (spending.)"

In the past, the annual guideline was used to set a cap on overall budget requests to curb the industrial world's heaviest public debt, which is more than twice the size of the Japanese economy.

However, the budget guideline has stopped short of setting a ceiling on overall budget requests for 10 straight years, paving the way for the fiscal 2023 budget to reach a record amount, some analysts say.

Takuya Hoshino, senior economist at Dai-ichi Life Research Institute, said the size of the budget would depend upon whether resources have to be devoted to tackling a resurgence of the coronavirus and on the amount for defence.

"I would not be surprised if it exceeds a record amount given spending pressure from lawmakers," he said.

The government will not set a cap for the defence budget request for the next fiscal year, underlining resolve to beef up expenditure to counter China's military assertiveness.

The government will also set aside some 4.4 trillion yen ($33.12 billion) for Kishida's "new capitalism" agenda targeting investment in areas like green and digital transformation, the guideline shows.

Ministries are required to submit spending requests for inclusion in the guideline by the end of August. Budget requests will then be scrutinised by the Ministry of Finance before an annual budget is compiled in late December.

Under the guideline, social security budget requests can rise to 560 billion yen to help fund the cost of supporting its fast-ageing population.

The amount will be set as a "natural increase" in welfare spending needed to keep up with the bulging costs of social security, which accounts for a third of the annual budget, which is worth some 107 trillion yen.