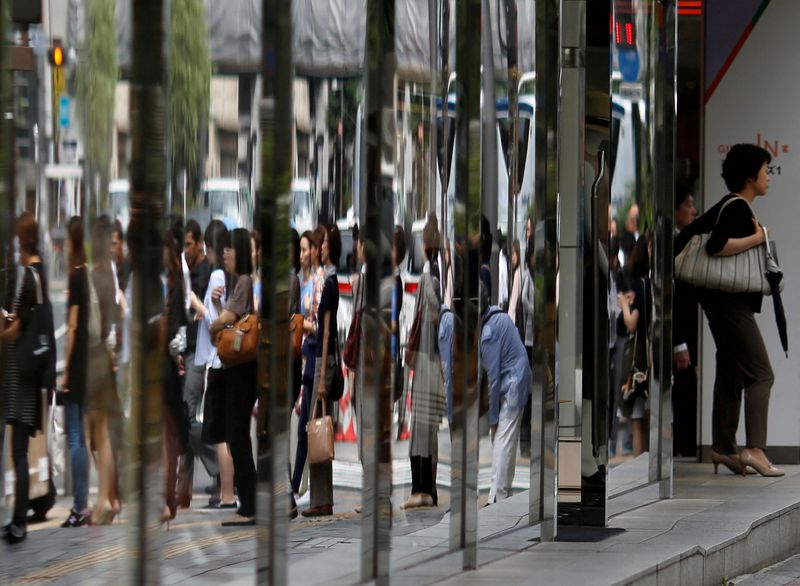 © Reuters. FILE PHOTO: People are reflected in the windows of a dapartment store in a shopping district in Tokyo, Japan June 29, 2016. REUTERS/Toru Hanai

TOKYO (Reuters) - Japan's household spending likely rose in November for the first time in four months while consumer inflation in Tokyo area is expected to have hit a 22-month-high in December, a Reuters poll showed.

Low coronavirus cases have boosted consumption and the broader economy throughout the last quarter of 2021, but the recent spread of the new Omicron variant and increasing cost of goods have raised some concerns about Japan's recovery this year.

Household spending likely gained 1.6% in November from a year earlier, according to a median estimate of a Reuters poll of 16 economists. That would follow a 0.6% drop in October and mark the first rise since July.

Month-on-month, household spending is expected to have increased 1.2% in November, following a 3.4% advance in October.

"Goods consumption picked up, restaurant (spending) recovered and foot traffic increased...private consumption on goods and services likely rebounded across the board thanks to coronavirus containment."

Indeed, a lull in infections is expected to have driven a solid rebound in the world's third-largest economy in the fourth quarter of 2021, after a worse-than-forecast contraction in July-September.

The main uncertainty coming into the New Year is the rising number of nationwide coronavirus infections. Community transmission of the more infectious Omicron variant had already started in December, ahead of Japan's holiday season when many travellers return home for the New Year.

Given the soaring energy prices, utility expenses such as electricity and gas bills likely pushed up the pace of consumer inflation, said Shumpei Fujita, an economist at Mitsubishi UFJ (NYSE:MUFG) Research and Consulting.

Analysts have warned another wave of outbreaks and rising costs could cool budding consumption and the economy's recovery.