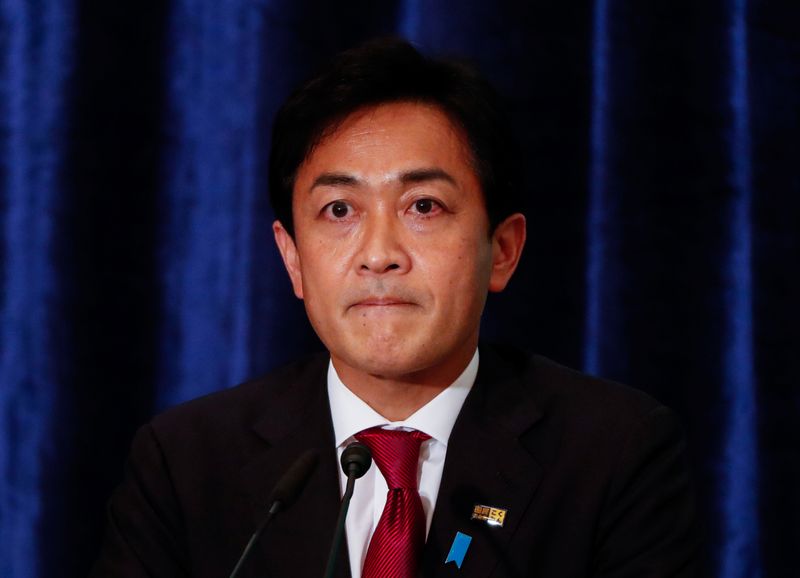 © Reuters. The Democratic Party for the People leader Yuichiro Tamaki attends a debate session with other leaders of Japan's main political parties, ahead of October 31, 2021 lower house election, at the Japan National Press Club in Tokyo, Japan October 18, 2021. RE

By Takaya Yamaguchi and Tetsushi Kajimoto

TOKYO (Reuters) - Japan should not raise interest rates to stem recent sharp falls in the yen to 24-year lows but instead deploy further fiscal stimulus to ease the pain of rising living costs caused by the weak currency, the head of the country's opposition party said.

A rate hike in Japan would do more harm than good, Yuichiro Tamaki, the head of the Democratic Party for the People, told Reuters, noting yen weakness has been largely driven by a surging U.S. dollar.

"The dollar is gaining against all the currencies. Even if the Bank of Japan raises rates, it wouldn't stop the yen weakening but rather hurt Japan's economy," he said.

"We must mobilise fiscal spending steadily to strengthen the economy," said Tamaki, a former finance ministry bureaucrat well-versed with monetary and currency policies.

Although his opposition party has a small number of seats, Tamaki is skilled at debating monetary policy and occasionally grills Bank of Japan Governor Haruhiko Kuroda at parliamentary sessions.

The opposition's criticism against government stimulus policy and its side-effects, namely soaring costs of everything from food to fuel, is likely to gain traction with the public as an extra parliament session is set to convene next month.

The opposition has come up with countermeasures: more fiscal stimulus.

His party is calling for an emergency stimulus package worth 23 trillion yen ($160.44 billion), centring on cash payouts of 100,000 yen per person with the aim of stimulating consumption to achieve more durable economic growth.

Tamaki also urged the BOJ to add nominal wage growth of 2% to its 2% inflation target stipulated in a joint accord between the government and the BOJ issued in 2013.

The joint statement targets 2% inflation as the central bank's key objective. However, a combination of tepid wages and rising living costs is curbing real incomes, hurting household purchasing power and consumption that makes up more than half the economy.

"We need to plainly explain to the public which indicator should be used for 2% target," Tamaki added.

His party has proposed turning some of about 500 trillion yen ($3.49 trillion) in government debt held by the BOJ into 'perpetual bonds' to help the government finance its massive debt.

In 2018, Tamaki and like-minded lawmakers proposed legislation urging the BOJ to clarify an exit strategy from its massive monetary stimulus and demanding the government proceed with fiscal reform, saying stimulus policy was stuck in a dead end.