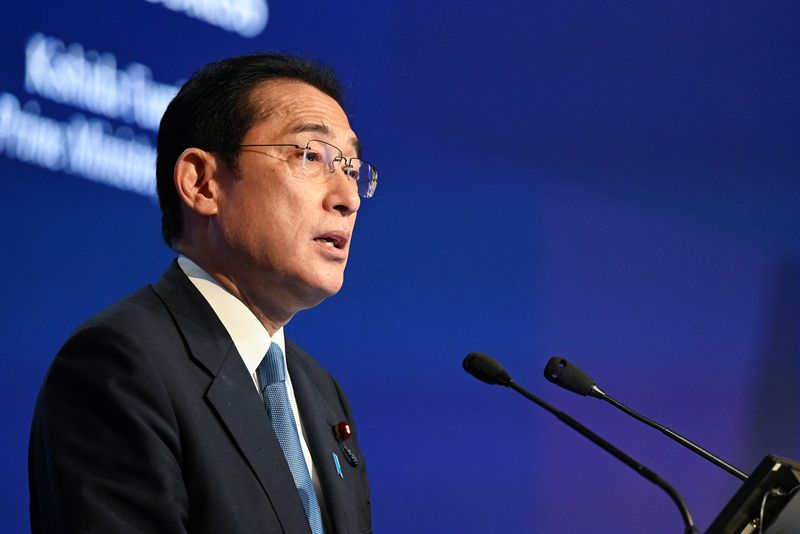 By Tetsushi Kajimoto and Kantaro Komiya

TOKYO (Reuters) -Japanese Prime Minister Fumio Kishida said on Wednesday he expected the Bank of Japan (BOJ) to stick to a 2% inflation target, when asked about a possibility the central bank may adjust its massive stimulus to stem the yen weakening.

"Monetary policies certainly affect currency (moves), but they also have a big impact on the business costs of small and medium-sized firms through interest rates," Kishida told a news conference.

While currencies are a big issue, the BOJ is deciding its monetary policies considering various effects, Kishida said.

"The monetary policy specifics are up to the BOJ to decide, the government expects it to keep efforts to maintain the sustainable, stable achievement of the price stability target."

Kishida did not break new ground with his remarks on monetary policy, which he said should be left to the central bank to decide.

The BOJ has repeatedly shrugged off any notion of targeting currencies with monetary policy, saying that achieving price stability is its sole objective.

Still, the recent sharp yen weakening has stoked worry about surging costs of living through more expensive imports, raising speculation that the central bank may take steps on the weak yen at its policy meeting that ends on Friday.

Kishida said the government would launch a taskforce to respond to price rises and boost wages.

"Current price hikes have had a large impact on Japanese people's lives and business activities. The government must take it seriously and carry out measures," he said.