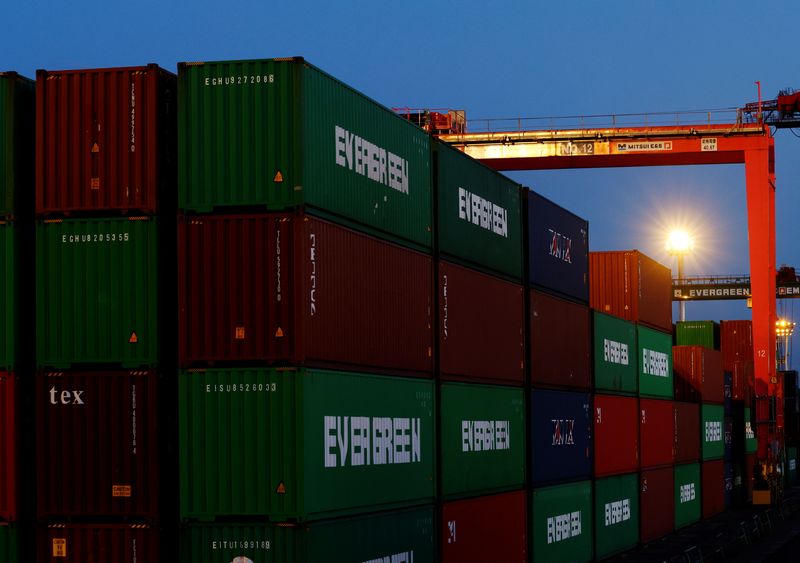 TOKYO (Reuters) - Japan ran a trade deficit for the 11th straight month in June as high energy and other commodity costs pushed up imports, highlighting growing economic pressures from a sharply declining yen and global inflation.

Imports surged 46.1% in the year to June, Ministry of Finance data showed on Thursday, slightly above a median market forecast for a 45.7% gain in a Reuters poll.

That outpaced a 19.4% year-on-year rise in exports in the same month, resulting in a 1.3838 trillion yen ($9.99 billion) trade deficit, the 11th straight month of shortfalls.

June's deficit was bigger than the 1.510 trillion yen gap expected in a Reuters poll.

Imports swelled due to a surge in shipments of oil from Saudi Arabia and coal and liquefied natural gas (LNG) from Australia. Imports of LNG from Malaysia and coal from Indonesia posted triple-digit surges, the data showed.

"Car exports remain the Achilles heel of Japan's manufacturing sector as they were only up 0.4% year-on-year, but that marked at least a pick-up from the 7.9% year-on-year fall in May," he added.

By region, exports to China, Japan's largest trading partner, rose 8.3% in the 12 months to June, recovering from two months of declines on stronger shipments of chip parts. China-bound exports of cars posted a sharp 23.2% year-on-year decline, the data showed.

Shipments bound for the United States, the world's largest economy, gained 15.7% in June, thanks to stronger exports of medical products.

The Bank of Japan is expected to maintain its ultra-loose monetary policy later on Thursday, a commitment that could lead to further falls in the yen.

While the yen's slide against the U.S. dollar and other currencies this year has pushed up import costs, Japan's economy is still projected to have returned to growth in the second quarter following a decline in January-March.

However, the recovery from the COVID-19 pandemic faces headwinds from slowing global growth, lower exports and persistent supply chain snags.

That has forced policymakers to maintain sufficient stimulus in the economy, going against a global tide of rate increases to rein in rampant inflation.