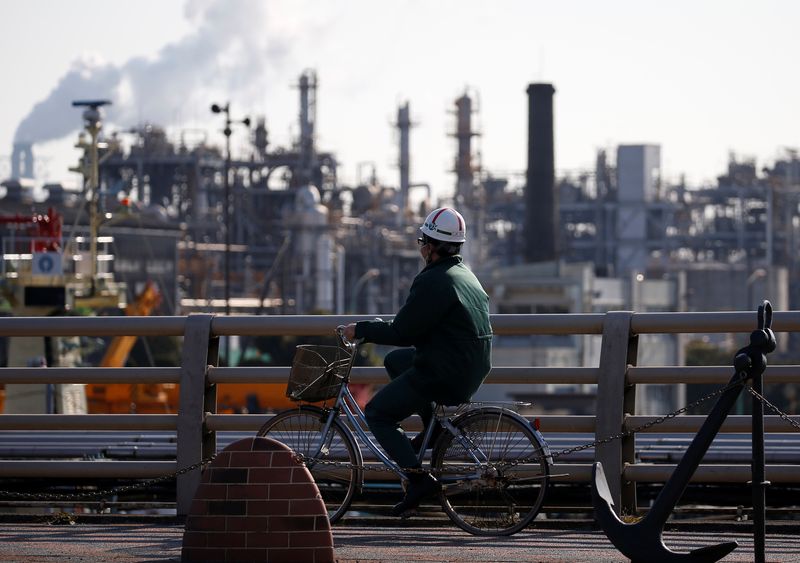 © Reuters. FILE PHOTO: A worker cycles near a factory at the Keihin industrial zone in Kawasaki, Japan February 28, 2017. REUTERS/Issei Kato

TOKYO (Reuters) - Japan's factories ramped up output at the fastest pace in more than nine years in June as disruptions due to China's COVID-19 curbs eased, a welcome sign for policymakers hoping the economic outlook will improve.

Separate data showed retail sales rose for the fourth straight month in June, supporting the view that rising consumption helped the economy return to growth in the second quarter after contracting in January-March.

The advance was largely due to the lifting of a strict COVID lockdown in Shanghai, which gave a tailwind to Japanese output of motor vehicles, electrical machinery and electronic parts and devices.

While the advance was bigger than a 3.7% gain expected by economists in a Reuters poll, a government official said downside risks for output remained as parts supply delays lingered.

The data comes after Toyota Motor (NYSE:TM) Corp said on it produced 793,378 vehicles globally in June, slightly above a target it had cut twice and capping a quarter that saw the company slip 9.8% behind its production plan.

The world's largest automaker by sales has struggled to meet its global production goals in recent months due to chip shortages and disruptions caused by the lockdowns in China.

The government upgraded its assessment of industrial production, saying it was moving back and forth.

Manufacturers surveyed by the Ministry of Economy, Trade and Industry (METI) expected output to extend its recovery by 3.8% in July and 6.0% in August.

Separate data showed retail sales were weaker than expected, but still posted their fourth straight month of gains, rising 1.5% in June from a year earlier. That compared to a median forecast for a 2.8% gain in a Reuters poll.

The jobless rate, meanwhile, stood at 2.6% in June, unchanged from the previous month, while an index gauging job availability was 1.27 in June, slightly higher than 1.24 in May.