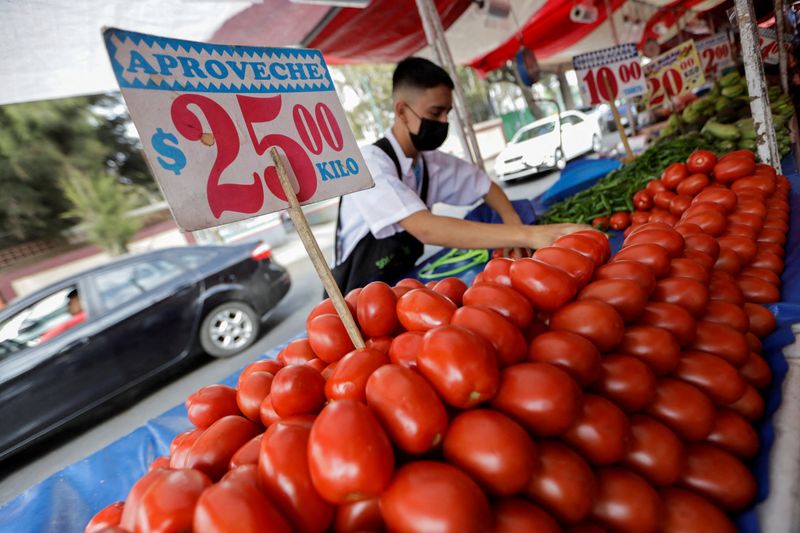 MEXICO CITY (Reuters) - Inflation in Mexico was lower than expected during the first half of December, data showed on Thursday, though core inflation exceeded forecasts, prompting a member of the central bank's board to voice concern about underlying price pressures.

National statistics agency INEGI said inflation reached 7.45% in early December after averaging 7.37% in November, which was the highest rate in Mexico since early 2001.

An initial Reuters poll predicted inflation would come in at 7.73% in early December.. With final survey responses, the consensus forecast stood at 7.67%.

The core rate of inflation, which strips out some volatile items, hit 5.87%, above analysts' prediction for 5.70%. The initial Reuters consensus forecast for core inflation was 5.68% after the core rate had reached 5.67% in November.

Jonathan Heath, a board member of the Bank of Mexico, which last week raised its benchmark interest rate 50 basis points to 5.50% to try to contain price pressures, expressed concern over the continuing acceleration in core inflation.

"Although headline inflation managed to decelerate at the margin, this is not good news, as the core of the problem persists," Heath said on Twitter (NYSE:TWTR).

The central bank last week also revised up its expectations for Mexican inflation at the end of this year and for 2022.

The bank targets inflation of 3%, with a one percentage point tolerance range above and below that.

Compared to the previous two-week period, consumer prices rose 0.10% in the first half of December. The core index meanwhile climbed by 0.59%, the INEGI data showed.