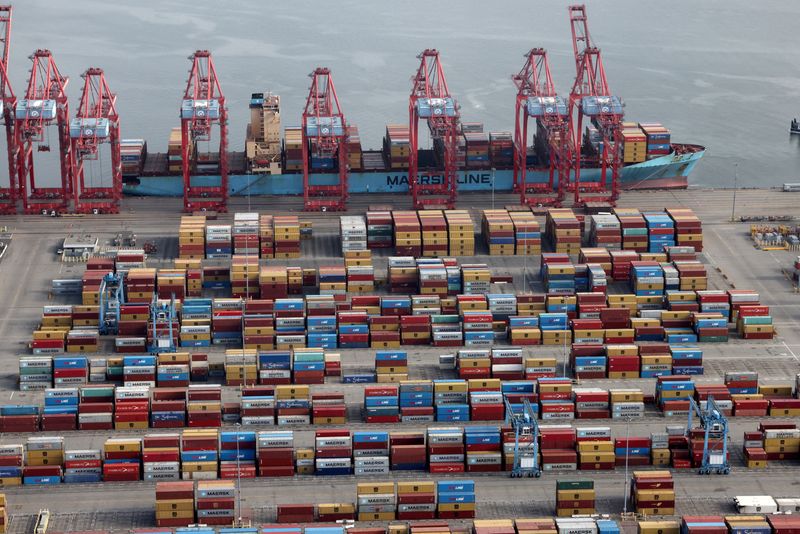 © Reuters. FILE PHOTO: Shipping containers are unloaded from a ship at a container terminal at the Port of Long Beach-Port of Los Angeles complex, in Los Angeles, California, U.S., April 7, 2021. REUTERS/Lucy Nicholson/File Photo

WASHINGTON (Reuters) - U.S. economic growth likely rebounded moderately in the second quarter as companies boosted exports and maintained a strong pace of spending on equipment, which could assuage financial market fears that the economy was already in recession.

The Commerce Department's advance second-quarter GDP report on Thursday will, however, still show that the economy was losing momentum because of high inflation that has prompted the Federal Reserve to aggressively tighten monetary policy.

"The economy is still doing okay," said Brian Bethune, an economics professor at Boston College. "It is not as strong as it was in 2021, but we are not in a recession."

According to a Reuters survey of economists, GDP growth likely rebounded at a 0.5% annualized rate last quarter. Estimates ranged from as low as a 2.1% rate of contraction to as high as a 2.0% growth pace.

The survey was, however, conducted before data on Wednesday showing the goods trade deficit in June was the smallest in seven months and shipments of non-defense capital goods excluding aircraft increased strongly.

The reports prompted JPMorgan (NYSE:JPM) to upgrade its second-quarter GDP growth estimate to a 1.4% rate from a 0.7% pace. Goldman Sachs (NYSE:GS) raised its forecast by 0.6 percentage point to a 1.0% rate. Several other Wall Street banks also boosted their estimates. The Atlanta Fed lifted its estimate by four-tenths of a percentage point to a still negative 1.2% rate.

A slew of soft housing data as well as weak business and consumer sentiment surveys had heightened expectations for a second straight quarterly negative GDP reading. The economy contracted at a 1.6% pace in the first quarter.

The White House is vigorously pushing back against recession chatter as it seeks to calm voters ahead of the Nov. 8 midterm elections that will decide whether President Joe Biden's Democratic Party retains control of the U.S. Congress.

Treasury Secretary Janet Yellen is scheduled to hold a news conference on Thursday to "discuss the state of the U.S. economy."

Another decline in GDP would meet the standard definition of a recession. But the National Bureau of Economic Research, the official arbiter of recessions in the United States defines a recession as "a significant decline in economic activity spread across the economy, lasting more than a few months, normally visible in production, employment, real income, and other indicators."

Job growth averaged 456,700 per month in the first half of the year, while industrial production increased at a 6.1% rate in the second quarter. But homebuilding has softened.

"While the relevant economic indicators look mixed, we don't think the NBER will feel the need to characterize the first half of the year as a recession even if GDP contracted across the first two quarters of 2022," said Daniel Silver, an economist at JPMorgan in New York.

Slowing growth, however, could encourage the Fed to step back from hefty interest rate increases, though much would depend on the path of inflation, which is way above the U.S. central bank's 2% target.

The Fed on Wednesday raised its policy rate by another three-quarters of a percentage point, bringing the total interest rate hikes since March to 225 basis points. Fed Chair Jerome Powell acknowledged the softening economic activity as a result of tighter monetary policy.

A smaller trade deficit, thanks to record exports, is expected to have added as much as 1.5 percentage points to GDP growth last quarter. That would end seven straight quarters in which trade was a drag on growth.

While businesses continue to rebuild inventory, the pace has slowed from what was seen in the fourth quarter of 2021 and the first three months of this year. Part of that is because of shortages of materials like semiconductors, which are hampering production of motor vehicles. On the other hand, slowing consumer spending due to inflation has left retailers with excess inventory and little appetite to accumulate more stock.

Walmart (NYSE:WMT) this week said it needed more price cuts to pare inventories, which it estimated in May were over $60 billion at the end of the first quarter.

Inventories are expected to have sliced off at least 0.7 percentage point from GDP growth last quarter. Growth in consumer spending, which accounts for more than two-thirds of U.S. economic activity, is believed to have cooled off considerably from the first-quarter's moderate 1.8% rate.

"Consumers got whipsawed by the surge in gasoline prices," said Ryan Sweet, a senior economist at Moody's (NYSE:MCO) Analytics in West Chester, Pennsylvania. "You will see an increase in consumer spending but it's just not going to be as strong as in the past several quarters."

While the pace of growth in business spending on equipment probably slowed from the January-March quarter's robust rate, it was likely still enough to help the economy rebound from its first slump since the second quarter of 2020.

A measure of domestic demand - excluding trade, inventories and government spending - will be closely watched to gauge how much momentum the economy still retains.

Final sales to private domestic purchasers account for roughly 85% of aggregate spending and increased at a 3.0% rate in the first quarter. Residential investment is expected to have contracted, pulled down by weakness in homebuilding as well as homes sales, which reduced brokers' commissions.