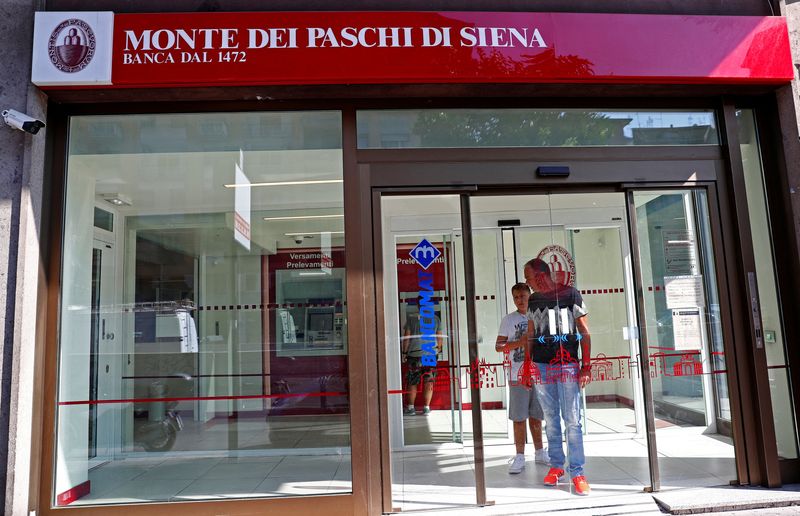 LONDON (Reuters) -Monte dei Paschi di Siena (MPS) said it would tap taxpayers and investors for 2.5 billion euros ($2.6 billion) in cash to fund its latest turnaround efforts as the Italian state-owned bank seeks to triple its net profit in the next three years.

Italy owns 64% of the world's oldest lender after a 2017 bailout that cost taxpayers 5.4 billion euros. Rome will fund the latest capital raising based on the size of its stake, pumping in another 1.6 billion euros.

Unveiling a new strategy to 2026 on Thursday under new Chief Executive Luigi Lovaglio, MPS said it had secured a preliminary agreement with a group of banks to mop up unsold shares in the cash call.

Under its new plan, MPS said it would close 11% of its branches and lay off around 4,000 staff on a voluntary basis, with a one-off charge of 800 million euros.

Lovaglio, a veteran Italian banker who took the helm at MPS in February, also intends to streamline the bank's structure by merging subsidiaries MPS Capital Services, MPS Leasing & Factoring and the IT services unit into the group.

MPS will shed 1.3 billion euro in bad loans by 2026, starting with an 800 million euro disposal it expects to complete later this year.

The Tuscan lender said it had secured a pre-underwriting accord with BofA, Citigroup (NYSE:C), Credit Suisse and Mediobanca (OTC:MDIBY) to act as joint global coordinators of the new share issue.

It expects to hold a shareholder meeting to approve the share issue when its board meets for first-half results, once Italy finalises talks with European Union competition authorities over new restructuring commitments for the bank.

Italy failed to meet an end-2021 deadline to return MPS to private hands due to the collapse of sale talks with UniCredit.

It is now negotiating an extension of the deadline with European Union competition authorities and new turnaround goals.

Sources have told Reuters Italy has reached an informal agreement with the EU over a new years-long re-privatisation deadline and the new targets, with a formal agreement set to follow in the coming weeks.

Projecting a 2% annual revenue growth on average over the plan's life, MPS said it targeted one billion euros in net income in 2024, up from 310 million euro last year, falling to 833 million in 2026.

It expects to be able to resume paying dividends from 2025.