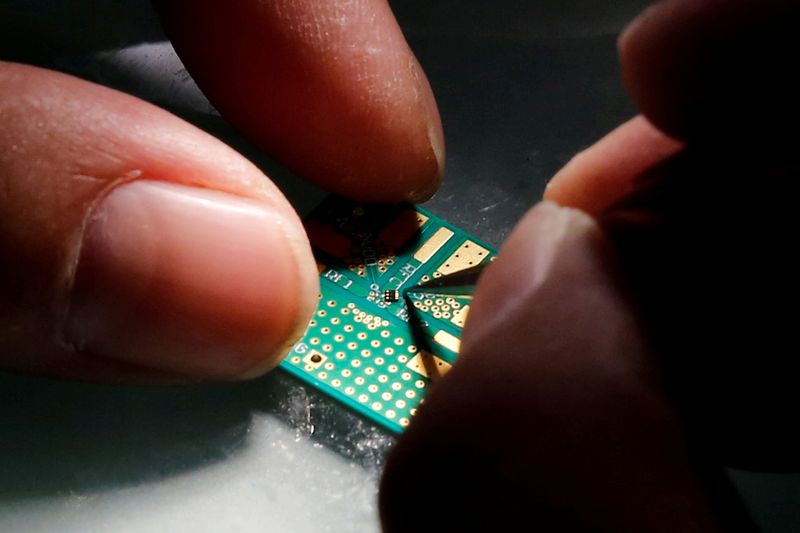 © Reuters. FILE PHOTO: A researcher plants a semiconductor on an interface board during a research work to design and develop a semiconductor product at Tsinghua Unigroup research centre in Beijing, China, February 29, 2016. REUTERS/Kim Kyung-Hoon/File Photo

Those executives and more than 100 others signed a letter urging the U.S. House of Representatives and Senate, which each have passed different versions of the legislation, to reach an agreement and send a bill to President Joe Biden for his signature. Legislators will break for a summer recess in August, after which most observers expect lawmakers to shift their attention to this fall's midterm elections.

"Our global competitors are investing in their industry, their workers, and their economies, and it is imperative that Congress act to enhance U.S. competitiveness," said the letter https://www.semiconductors.org/resources/ceo-letter-on-competitiveness-bill.

The Semiconductor Industry Association (SIA), which organized the letter signing, said the letter was the largest group of corporate leaders so far to endorse the bill.

“The leaders of our industry are under pressure to get fabs up to respond to the growing demand for chips. And they can't wait,” said SIA CEO John Neuffer, adding that the bill would “ensure that more of those fabs are going to be built in the U.S. rather than overseas.”

The SIA is also calling for an investment tax credit for semiconductor manufacturing and design in the competitiveness legislation.

Democratic House Majority Leader Steny Hoyer said he hoped lawmakers could complete the legislation by the end of the month. He added that Republican Senate Minority Leader Mitch McConnell told him “he is not going to do anything to oppose or undermine consideration of this bill.”