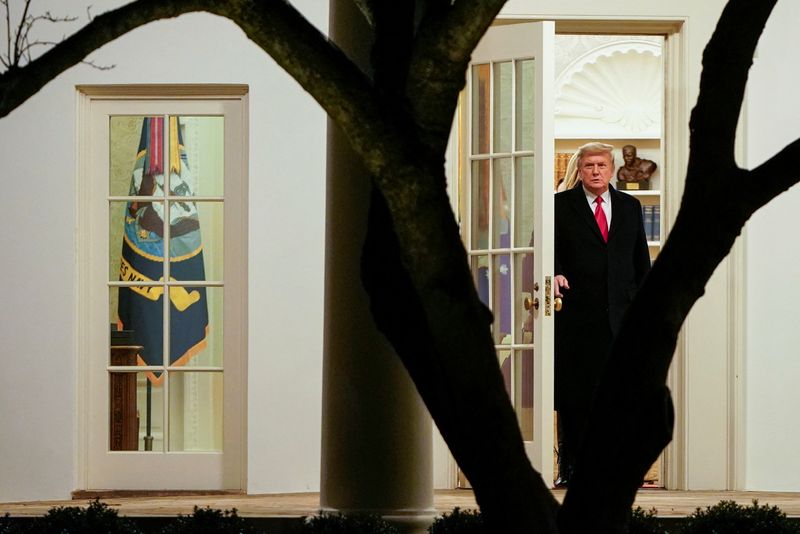 © Reuters. FILE PHOTO: U.S. President Donald Trump walks to Marine One as he departs to campaign for Republican candidates in the Georgia Senate runoff race from the White House in Washington, U.S., January 4, 2021. REUTERS/Joshua Roberts

NEW YORK (Reuters) -A New York man upset with what he perceived as Donald Trump's threats to democracy was criminally charged on Monday with threatening to kill the former U.S. president, who he once referred to as Hitler.

Prosecutors said the defendant, Thomas Welnicki, 72, of Rockaway Beach, threatened to do "everything I can" to ensure the death of Trump, and once inquired about Secret Service protection for former presidents and their children.

Welnicki was charged with threatening to kill, kidnap, and inflict bodily harm on Trump.

"Mr. Welnicki intended no harm to anyone," his lawyer Deirdre von Dornum, attorney-in-charge of the federal defender's office in Brooklyn, said in an email. "He was expressing how distraught he was at what he saw as the threats to our democracy posed by former President Trump."

Lawyers and spokespeople for Trump did not immediately respond to requests for comment.

Prosecutors said Welnicki expressed interest in Trump's demise between July 2020 and December 2021, during and after Trump's presidency, in several voluntary communications with U.S. Capitol Police and the Secret Service.

Welnicki allegedly told Capitol Police in a July 2020 interview that if Trump lost the election and refused to step down, he would "acquire weapons" and "take him down."

Prosecutors said Welnicki called the Secret Service around Jan. 4, 2021, threatening to kill Trump and 12 unnamed congressional supporters, and referring to a $350,000 bounty.

"I will do anything I can to take out (Trump) and his 12 monkeys," Welnicki was quoted as saying. "Tomorrow (Trump) will be in Georgia, maybe I will."

The complaint said Welnicki's threats continued in the autumn of 2021, when he likened Trump to Adolf Hitler and referred to Trump's children.

He also allegedly told the Secret Service on Dec. 2, 2021, that "the new Civil War could break out and taking up arms against the government is justified when ballots don't matter."