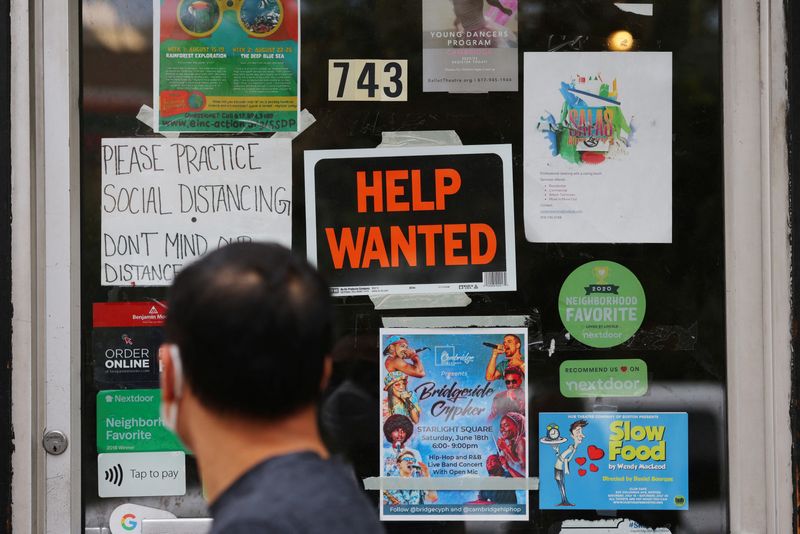 (Reuters) - The number of U.S. workers on the job and the total hours worked fell in July, industry data showed on Monday, days before the release of a monthly employment report that is expected to show the labor market cooled after a surprise economic contraction in the second quarter.

Employees worked approximately 12% fewer hours in July than in the previous month, according to an analysis from Homebase, a payroll scheduling and tracking company that tracks data for about 2 million employees working for more than 100,000 small businesses.

The data align with expectations for a slowdown in job growth in July when the U.S. Labor department releases its monthly employment report on Friday. Nonfarm payrolls likely increased by 250,000 jobs last month after rising by 372,000 in June, according to a Reuters survey of economists. Private payrolls are forecast to have increased by 223,000 jobs.

However, a separate survey by Homebase also showed while about 80% of owners and employees said they were concerned about a recession, only a small percentage of workers signaled they would adjust their entertainment or travel plans while owners said they were not preemptively planning layoffs in light of the deteriorating outlook.

The Federal Reserve last week raised the target range for its benchmark overnight lending rate to 2.25%-2.50%, and indicated more rate hikes ahead as it struggles to bring high inflation under control. Fed officials are attempting to weaken demand across the economy without causing a sharp rise in unemployment.

The central bank was not helped on Friday by data that showed U.S. labor costs increased strongly in the second quarter as a tight jobs market boosted wage growth, suggesting inflation could remain elevated and force policymakers to keep up their aggressive pace of rate hikes.