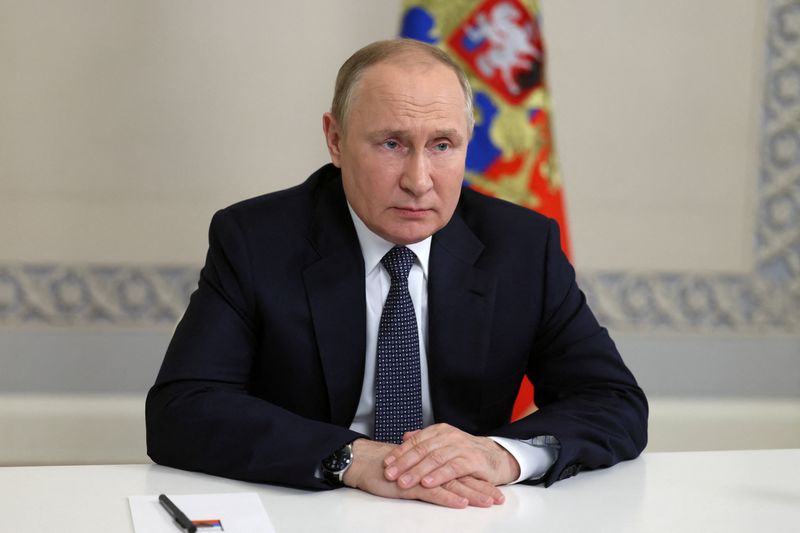 LONDON (Reuters) - President Vladimir Putin signed a decree on Wednesday to establish temporary procedures aimed at fulfilling Russia's foreign debt obligations as the country teeters on the brink of default.

The Kremlin has repeatedly said there are no grounds for Russia to default on its debts. It says the government has the funds to pay but was unable to make interest payments to bondholders because of sanctions, accusing the West of trying to drive Russia into an artificial default.

Under the order, Putin has given the government 10 days to choose banks to handle payments on Eurobonds under a new scheme, suggesting that Russia will consider its debt obligations fulfilled when it pays bondholders in roubles.

The failure to service foreign debt due to Western sanctions for what Russia calls a "special military operation" in Ukraine is taking it closer to its biggest default on international bonds since the Bolshevik revolution more than a century ago.

"Obligations on Eurobonds of the Russian Federation will be considered properly fulfilled if they are executed in roubles in the amount equivalent to the value of obligations in foreign currency," the decree stated.

The exchange rate will be based on the rate on the Russian internal currency market on the day of the payment, according to the decree.

Russia's $40 billion of outstanding hard-currency bonds have become a flashpoint in the financial sanctions imposed by Western capital and counter-measures introduced by Moscow.

Despite the stringent curbs, Moscow so far had managed to avoid a default and make payments to international holders on seven different eurobonds since the start of the war by finding new ways of transferring money and coming up with workarounds.

"They are trying to shift the ball from their own court to that of the investors," said Tatiana Orlova, lead economist at Oxford Economics.

"What they are doing is establishing the mechanism for the finance ministry to make payments in roubles into banks not under Western sanction," she said, adding it was unclear whether bondholders would go along with the plan.

A default could come at around the end of June.

Russia said it had transferred the cash to the National Settlement Depository, but sanctions likely prevented the funds from progressing further.

To avert default, funds broadly have to be paid in the correct currency into bondholders' accounts within the prescribed timeframe.

The finance ministry said last week Russia will pay roubles on its Eurobonds that can be later converted into foreign currency.

Analysts expected Putin's decree to do little to change the trajectory of the country careering towards a default in its international bonds, which were issued under English law.