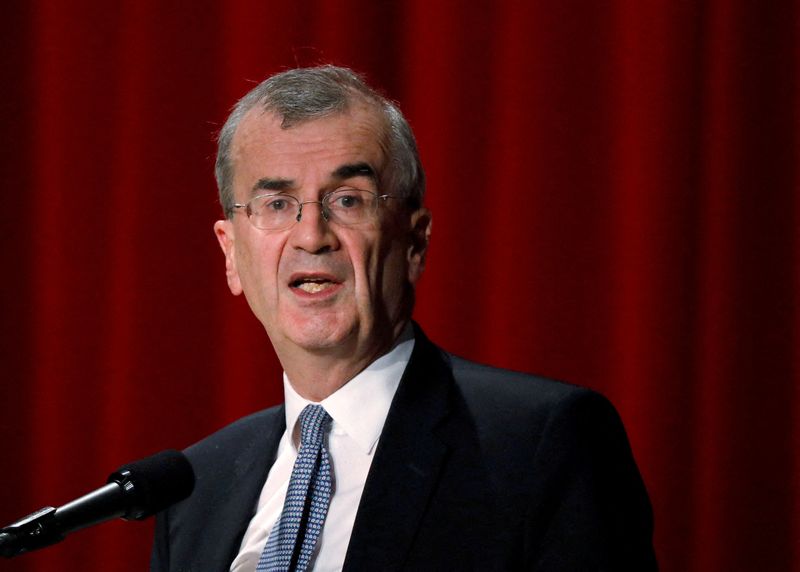 PARIS (Reuters) - Higher interest rates make it all the more important for post-pandemic government debt levels to be brought to more sustainable levels, the head of France's central bank said on Tuesday.

France borrowed heavily during the pandemic to stabilise its economy, pushing the public debt from just under 100% of gross domestic product in 2019 to nearly 113% last year.

With parties gearing up for legislative elections in June, many candidates' focus has been more on policies that would add to the debt. The hard-left leader of a new left-wing coalition hoping to secure a majority wants in particular to lower the retirement age to 60 years from 62.

At a conference organised by France's independent fiscal watchdog, Villeroy said too many people considered debt to "have no limit and no cost" after the exceptional borrowing during the pandemic and in light of the European Central Bank's plans to raise interest rates in the face of record inflation.

"Our council of governors will do as much as needed to fulfil our primary mandate of price stability, have no doubt about it," said Villeroy, who also sits on the European Central Bank's governing council.

"It is therefore all the more important for budgetary authorities to ensure debt sustainability as interest rates raise," he added.

The central bank estimates that each 1 percentage point increase in interest rates over time lifts France's annual debt servicing costs by 40 billion euros ($42 billion), nearly as much as the defence budget.

France could cut the debt to less than 100% in a decade by capping spending growth to 0.5% per year, half the more than 1% seen on average over the previous decade.