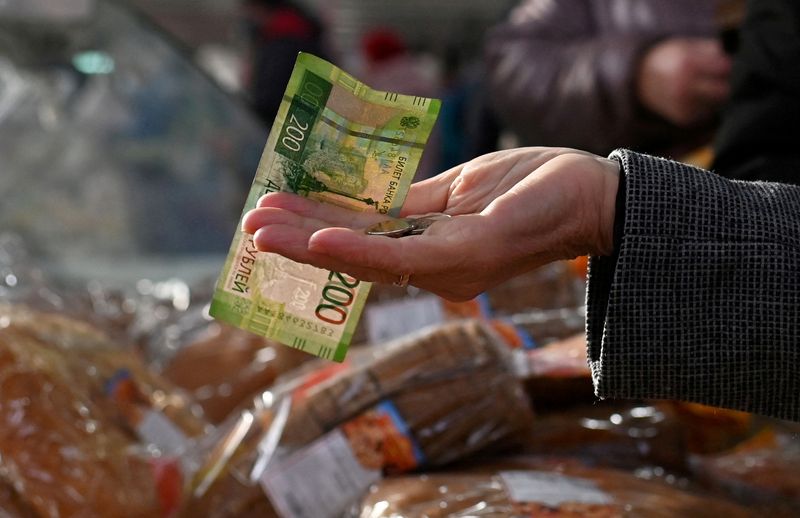 © Reuters. FILE PHOTO: A customer hands over Russian rouble banknotes and coins to a vendor at a market in Omsk, Russia October 29, 2021. REUTERS/File Photo

(Reuters) - The Russian rouble firmed on Friday, hovering near highs last seen in March 2020 against the euro and strengthening past 72 against the dollar, while the market awaited an expected rate cut by the central bank.

Movements on the Russian market are partly artificial as the rouble is propped up by capital controls, while stocks are trading with a ban on short selling and with foreign players barred from ditching shares in Russian companies without permission.

The rouble has firmed in the past few days as export-focused companies were selling their foreign exchange revenues to meet local liabilities that could exceed 3 trillion roubles ($43.26 billion) this month, according to analysts surveyed by Reuters.

The Bank of Russia is expected to cut its key interest rate by 200 basis points to 15% as it tries to stimulate more lending in the economy in the face of high inflation, a Reuters poll suggested earlier this week.

The rate decision is due at 1030 GMT, followed by a media briefing with Governor Elvira Nabiullina at 1200 GMT.

Lower rates support the economy through cheaper lending but can also fan inflation and make the rouble more vulnerable to external shocks.

The rouble has fully recovered to levels seen before Feb. 24, when Russia started what it calls "a special military operation" in Ukraine that led to unprecedented western sanctions, including a freeze on Russia's reserves and efforts to limit Russian banks' access to the global financial system.

Shares in VTB Bank outperformed the wider market, climbing 2.3% on the day after the Kommersant daily reported, citing sources, that the country's second-largest lender may merge with state-controlled banks Otkritie and RNCB.

Promsvyazbank analysts said the move would likely improve VTB Group's performance and the company's share price, as well as allow the banks to optimise their branch network.