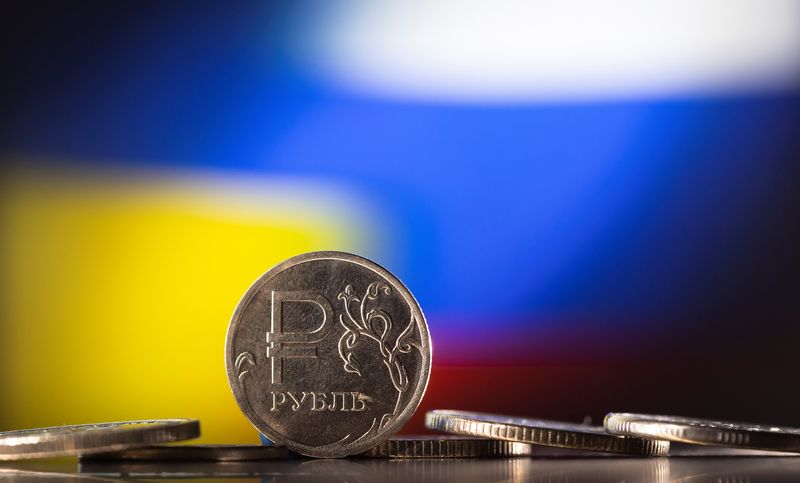 (Reuters) - The Russian rouble strengthened to a more than two-year high against the euro on Friday and headed back towards 66 versus the dollar, supported by capital controls and weak forex demand, as the spectre of more sanctions against Moscow hung over markets.

The European Union's executive on Wednesday proposed the toughest package of sanctions yet against Russia for its actions in Ukraine, but several countries' worries about the impact of cutting off Russia oil imports stood in the way of agreement.

The rouble was 1.1% stronger against the dollar at 66.24, close to a more than two-year high of 65.3125 hit on Thursday, a peak level that had not been seen since the onset of the COVID-19 pandemic.

The rouble has rallied in the past few weeks thanks to mandatory conversion of foreign currency by export-focused companies. Also, there has been weak demand for dollars and euros amid waning imports and restrictions on cross-border transactions.

"The rouble will be relatively stable, or even strengthen again thanks to expensive oil and low demand for foreign currency," said Otkritie Research in a note.

Moves in the rouble are sharper than usual as market liquidity has been thinned by central bank restrictions designed to prop up financial stability after Russia sent tens of thousands of troops into Ukraine on Feb. 24.

Meanwhile, trading activity is subdued as the markets are open for only three days this week in the middle of Russia's long May holidays.

Promsvyazbank analysts said they expected equity markets to drop ahead of another long holiday weekend.