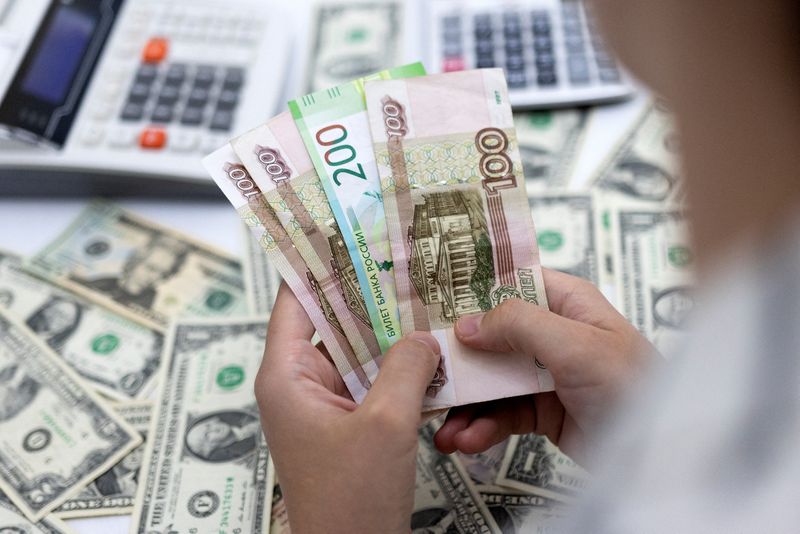 (Reuters) -The Russian rouble firmed on Friday to a more than two-week high against the dollar after the central bank cut its key interest rate by 150 basis points to its pre-crisis level of 9.5% and Russia eased some capital controls.

The central bank said it would consider the need for more cuts later this year, as inflation slows from near 20-year highs and economic contraction looms.

Lower rates should put some downside pressure on the rouble and support prices of OFZ treasury bonds, but the currency is still buoyed by capital controls that have been steering the currency since Moscow sent tens of thousands of troops into Ukraine on Feb. 24.

A majority of analysts polled by Reuters expected a 100-basis-point rate cut to 10%, with the bank trying to make lending more affordable amid sluggish consumer demand and a pause in inflation, although some had predicted a sharper cut.

"Nevertheless, it is worth noting that in combination with other factors, for example, abolishing mandatory foreign currency earnings sales by exporting companies, the currency could stop strengthening," he said.

The finance ministry said export-focused companies no longer had to convert their forex earnings from Friday, an easing in a capital control measure that analysts credit with helping to stop a dramatic slide in the value of the rouble after Western governments froze around $300 billion of the central bank's currency reserves.

Until May, Russian companies had been required to sell 80% of their hard currency earnings, a requirement that was then relaxed to 50%.

On stock markets, the dollar-denominated RTS index was up 4% at 1,261.2 points. The rouble-based MOEX Russian index was steady at 2,293.6 points.