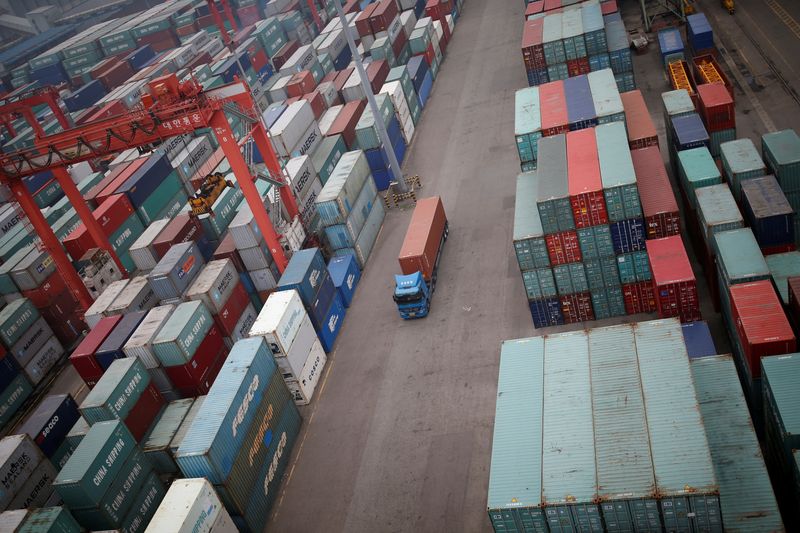 © Reuters. FILE PHOTO: A truck drives between shipping containers at a container terminal at Incheon port in Incheon, South Korea, May 26, 2016. REUTERS/Kim Hong-Ji

SEOUL (Reuters) - South Korean exports likely grew for a 14th straight month in December on year-end holiday demand for chips and petrochemical goods, while inflation is expected to remain near a decade high, a Reuters poll showed on Tuesday.

December exports in terms of value were seen expanding 22% from a year earlier, slowing from a 32% jump in November, according to the median forecast of 13 analysts.

"December shipments are expected to exceed $60 billion in value as demand is strong even as chip prices are declining, and petrochemical products are also enjoying record demand," said Ye-in Kim, an analyst at Korea Investment & Securities.

The nation's trade ministry said on Dec. 13 annual overseas shipments had reached a record high as of early December this year, supporting an economy that has relied on exports to underpin growth as social-distancing curbs to combat COVID-19 hurt domestic demand.

Tuesday's poll showed imports were seen growing 35.8% from a year earlier in December, also slowing from a 43.6% surge in November.

The full-month trade data will be published on Saturday at 9 a.m. local time (0000 GMT).

Analysts expect South Korea's consumer inflation at 3.6% in December, remaining above the central bank's 2% target for a ninth month in a row.

"CPI inflation likely to exceed 2% until the third quarter of next year, and that would justify an additional rate hike by the Bank of Korea from fundamental perspective," said Lee Seung-hoon, an analyst at Meritz Securities.

On Dec. 16, Governor Lee Ju-yeol said he sees the increasing threat of inflation taking hold in Asia's fourth largest economy, leaving the door open for an interest rate hike as early as January.