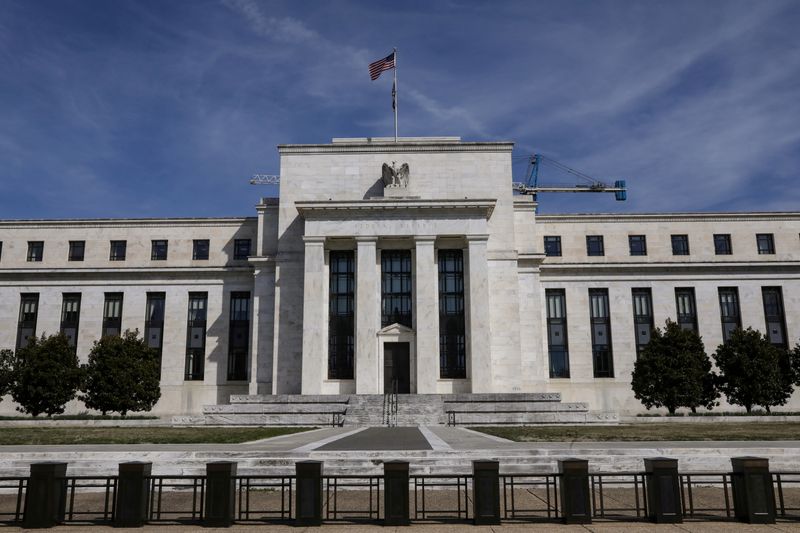 By Davide Barbuscia and David Randall

With markets reeling from last week’s robust inflation number, interest rate futures late Friday were pricing in a roughly 20% chance that the Fed will raise rates by 100 basis points at its Sept 21 meeting. That number was all but unthinkable earlier this month, when the market was debating whether the move would be 50 or 75 basis points. Investors are also pricing in meatier rate hikes down the road, with the terminal rate for U.S. fed funds now at 4.4%.

While earlier in the year some investors had criticized the Fed for moving too slowly, many are now more worried the frenetic pace of rate increases may not allow policymakers to gauge the effects of monetary tightening on the economy, increasing risks that they raise rates too far.

“We’re all scared of over-tightening and the hard landing scenario, because the Fed has over-tightened and caused hard landings more often than they have not,” said Jeffrey Sherman, deputy chief investment officer at bond fund DoubleLine.

U.S. data has shown an economy that appears to be humming along, despite 225 basis points in tightening already delivered by the Fed. Yet worrying signals are easy to find, from a dire earnings shortfall from delivery firm FedEx (NYSE:FDX) that the company blamed on slowing growth to a warning from the World Bank that even a “moderate hit” could send the global economy into a recession.

DoubleLine’s Chief Executive Jeffrey Gundlach, who had in June criticized the Fed for moving too slowly, told CNBC last week he was worried the Fed might hike rates too far. Ray Dalio, founder of Bridgewater Associates, the world’s largest hedge fund, wrote in a recent Linkedin post that a rise in rates to about 4.5% could sink stocks by about 20%. The Fed’s key policy rate stands at 2.25 to 2.5%.

“There is rising risk that the Fed … will overshoot with rate hikes in response to stubbornly high inflation data,” said Steven Oh, Global Head of Credit and Fixed Income, Co-Head of Leveraged Finance at PineBridge Investments. “By doing so, they increase the risk of a recession rather than the soft landing that they are seeking to achieve.”

Worries of Fed tightening have already contributed to a 19%decline in the S&P 500 this year. Global bonds have fallen sharply, helped by a steep selloff in Treasuries.

Fed Chairman Jerome Powell has said price pressure can be lowered without a sharp economic slowdown. He has also emphasized, however, that the central bank will be relentless in its fight to stamp out inflation.

"Central banks are facing much sharper tradeoffs. They need to choose to either live with more inflation or they kill growth. There’s nothing in between,” said Jean Boivin, Head of the BlackRock (NYSE:BLK) Investment Institute.

Boivin is underweight developed market equities and does not find government bonds attractive given that BlackRock expects the Fed to raise rates to 4.50% or higher next year.

Andrew Patterson, senior international economist at Vanguard, believes it may be preferable for the Fed to err on the side of aggressive action, given how stubborn inflation has been. The firm nevertheless sees https://corporate.vanguard.com/content/corporatesite/us/en/corp/articles/september-2022-investment-economic-outlook a 65% chance of a recession in the next 24 months.

Some investors think the economy may be resilient enough to withstand a more aggressive Fed. U.S. employment – an important snapshot of the broader economy - grew faster than expected in August.

Market signals have been more worrying, however, including the inversions of various parts of the Treasury yield curve - a phenomenon that has preceded past recessions. Foreign exchange trading pioneer John Taylor, CEO of Taylor Global Vision, is among the investors betting there will be more pain ahead in coming months.

“The equity market will get crushed and bring on a recession,” said Taylor, who is betting on more declines in the tech-heavy Nasdaq Composite Index. “This is overkill."

Sherman, of DoubleLine, hopes the Fed will be reactive to signs that growth is slipping, rather than going full steam ahead with its rate hikes regardless of consequences.

“This idea of flexibility, data dependency, we all want to hear that,” he said. “We don't want to hear automatic pilot.”