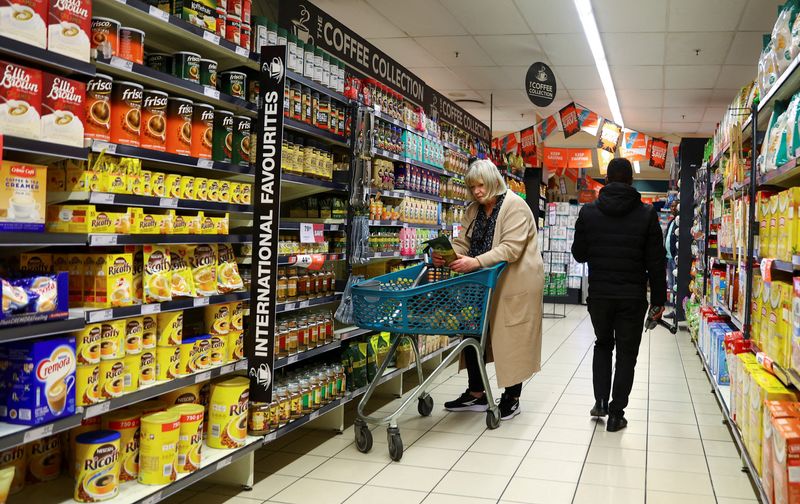 © Reuters. FILE PHOTO: A woman uses a trolley as she shops at a grocery store in East London, in the Eastern Cape province, South Africa, July 7, 2022. REUTERS/Siphiwe Sibeko

JOHANNESBURG (Reuters) - South African inflation surged to a 13-year high in June, data showed on Wednesday, moving further away from the central bank's target the day before an interest rate announcement.

Headline consumer inflation quickened more than forecast to 7.4% year on year in June, versus analysts' predictions for 7.2% and a reading of 6.5% in May.

June headline inflation was the highest since May 2009, during the global financial crisis.

Statistics South Africa figures showed fuel and food prices, which have soared globally due to the war in Ukraine, continue to be the major drivers of price pressures.

Fuel prices were up 45.3% in June, the largest annual increase for fuel since the agency's consumer price index series began in 2009.

Prices of food and non-alcoholic beverages rose 8.6%, the highest annual rate since March 2017 when the country was recovering from severe drought.

Analysts expect the South African Reserve Bank (SARB) to announce a further 50 basis point rise in the repo rate on Thursday, which would mark the fifth increase in a row.

The SARB targets inflation of between 3% and 6%, but inflation breached that band in May for the first time in over five years and has continued to climb.

On a month-on-month basis, consumer inflation was at 1.1% in June from 0.7% in the previous month, Stats SA figures showed.

Core inflation, which excludes prices of food, non-alcoholic beverages, fuel and energy, rose to 4.4% year on year in June, from 4.1% previously. On a month-on-month basis core inflation was at 0.6% from 0.2% in May.

The rand pared losses against the dollar on the inflation numbers.