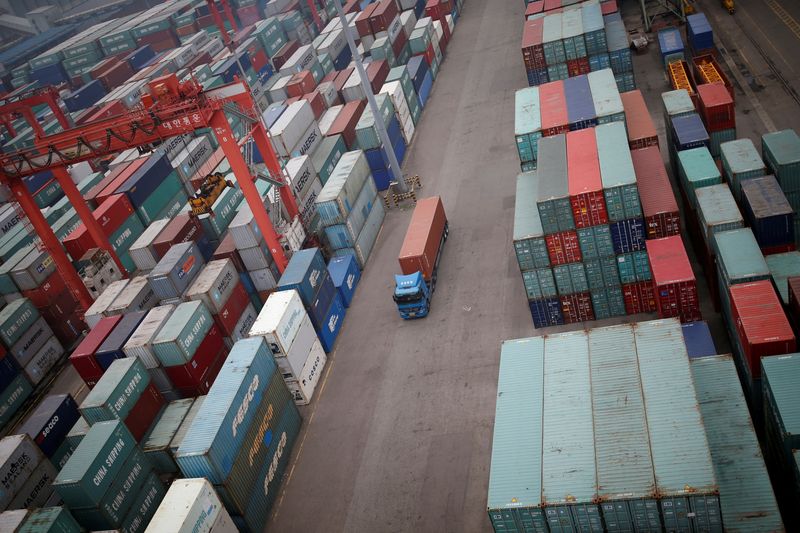 © Reuters. FILE PHOTO: A truck drives between shipping containers at a container terminal at Incheon port in Incheon, South Korea, May 26, 2016.REUTERS/Kim Hong-Ji

"We have to overcome the kind of complex global crisis as one facing us now through the promotion of exports," a media pool report quoted Yoon as saying at a meeting of top officials whose duties relate to exports.

"Every government agency should provide full support (to private-sector companies)," he added.

The government did not set any specific export target at the meeting, but said in a statement that the country needs to explore opportunities in regions such as the Association of Southeast Asian Nations (ASEAN).

The 10-nation bloc is already the second-biggest trade partner for South Korea and the main destination for its manufacturing companies to relocate production away from China, where costs are rising and growth is slowing.

South Korea's economy is cooling more rapidly than previously thought, with spending at home now fading following an earlier surge based on pent-up demand when COVID-19 curbs were lifted.

In a global report published on Tuesday, the Organisation for Economic Co-operation and Development (OECD) slashed its forecast for South Korea's economic growth for next year to 1.8%, down from 2.2% estimated just two months earlier.

That would mark a slowdown from expected growth of 2.7% this year and would be well below an average of 2.6% growth over the past 10 years.