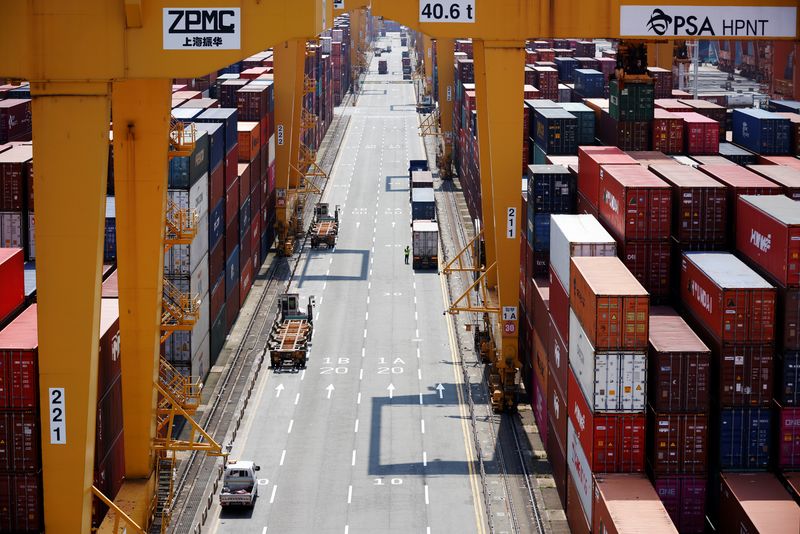 © Reuters. FILE PHOTO: A truck driver stands next to his truck as he gets ready to transport a shipping container at Pusan Newport Terminal in Busan, South Korea, July 1, 2021. REUTERS/Kim Hong-Ji

BENGALURU (Reuters) - South Korea's economic growth probably slowed a bit in the second quarter as falling exports and soaring import costs hurt private consumption that makes up about half of the economy, a Reuters poll found.

Exports in Asia's fourth-largest economy grew at their slowest pace in over 1-1/2 years in June as high inflation crimped overseas demand for South Korean goods, widening the trade gap and fuelling concerns about a global recession.

South Korea's export-driven economy is expected to have expanded a seasonally-adjusted 0.4% last quarter, according to the median forecast of 14 economists, a slowdown from the 0.6% rise in the preceding quarter.

On a year-on-year basis, gross domestic product (GDP) likely expanded 2.5%, according to the median of 19 economists, down from the first quarter's 3.0% growth. The data will release on July 26.

The economy is expected to lose momentum over the coming year as policymakers tighten fiscal spending to keep the debt-to-GDP ratio under control. South Korea's household debt ratio is among the highest in the world.

"Higher-than-expected inflation and faster-than-expected rate hikes increase the risk of a growth slowdown in 2023. As a result of the rises in debt servicing burdens and living costs, consumer confidence has started to deteriorate," said Ma Tieying, economist at DBS.

That, along with an economic slowdown in China, the country's largest trade and investment partner, will weigh heavily on the economy. [ECILT/CN]

Growth is forecast to average 2.5% this year, a sharp fall from 4.1% seen last year, a separate Reuters poll showed. It was then expected to further ease to 2.4% next year. [KR/INT]