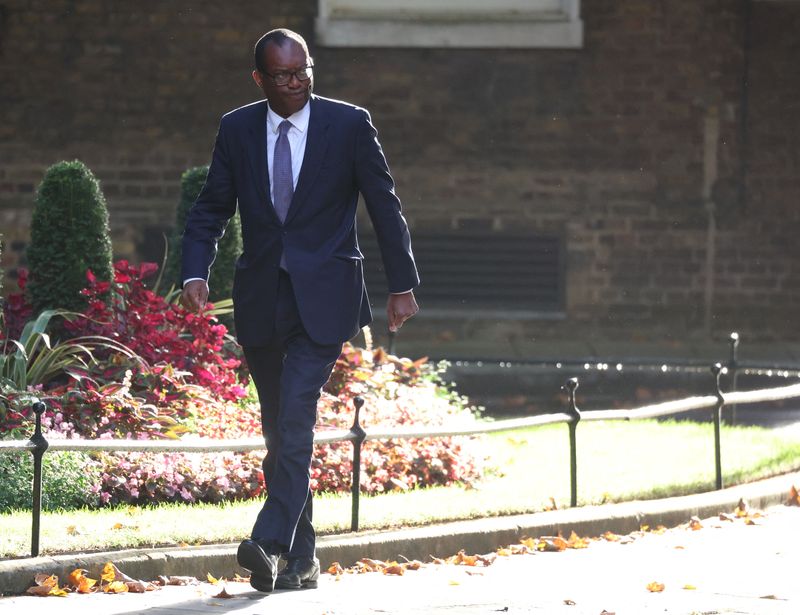 LONDON (Reuters) - There is trouble ahead for Britain's new finance minister Kwasi Kwarteng: a marked shift in how British assets are behaving in markets points to growing unease about the economy's vulnerabilities.

Investors around the world have typically capitalised on weakness in the pound in the past to snap up British equities and government bonds.

But that has not been the case recently as the FTSE 100 share index and gilts have moved in step with sterling, unlike after the 2016 Brexit vote when the pound's drop lured buyers, for example.

GRAPHIC-UK assets have moved in sync with the pound recently... : https://fingfx.thomsonreuters.com/gfx/polling/movanebyxpa/Pasted%20image%201663143613600.png

GRAPHIC-...but they typically move inversely, like after Brexit vote: https://fingfx.thomsonreuters.com/gfx/polling/jnvwemkbwvw/Pasted%20image%201663143911264.png

The new pattern became stark in August, the first time since 1983 that sterling fell more than 4% against the dollar and the 10-year gilt rose by as much as 50 basis points.

By contrast, the inverse relationship between the euro and stocks and German government bonds has remained largely intact.

While every major currency has slid against the rising dollar in recent months, the pound has declined more than most.

The synchronicity across British assets suggests investors are shunning them, reflecting concerns about the economy.

Britain's heavy reliance on energy imports is likely to mean inflation - which in July hit a 40-year high of 10.1% and only eased slightly in August - will last for longer than elsewhere. For the first time on record, British fuel imports accounted for more than 20% of the value of all goods imports in July.

New Prime Minister Liz Truss's hugely expensive plan to subsidise energy bills in combination with big tax cuts to boost economic growth at a time of rising prices - and her stated desire to rip up the economic orthodoxy - are reminiscent of policies in the early 1970s that contributed to spiralling inflation.

Kwarteng, appointed as chancellor of the exchequer last week, has defended the new government's plans, saying Britain has more room to borrow than other countries that have a higher share of public debt to economic output.

Kick-starting growth is the best way to get stronger tax revenues which will restore the public finances over the medium term, he says.

But investors are again focusing on Britain's core economic vulnerability: its reliance on funds from abroad to fund its balance of payments shortfall.

The January-March current account deficit hit a record 8.3% of economic output although statisticians said changes to post-Brexit data collection could have skewed the figures.

"The fiscal and external risks are now, in our view, a first-order concern," Benjamin Nabarro, economist from U.S. bank Citi, said.

Former Bank of England governor Mark Carney famously said Britain relied on the "kindness of strangers" to finance its current account gap, most of which stems from the trade deficit.

When Carney made that comment in early 2016, foreign direct investment accounted for about half of the net financial inflows from abroad.

Now, those FDI flows have turned steeply negative in net terms, leaving sales of flightier equities and bonds as Britain's main means of financing its current account gap over the past year.

Nabarro at Citi said the changes in the markets will not have escaped the BoE's Monetary Policy Committee which will see declining investor confidence in British assets as an unwelcome complication in its fight against inflation and could leave interest rates higher for longer.

"We suspect at least some on the committee have observed the simultaneous sell-off in sterling and gilts with no small degree of concern," Nabarro said. "In our view, these risks should increasingly be at the centre of the UK policy discussion."

Investors await the government's costings of its new energy bill package which Dutch bank Rabobank reckons could mean 100 billion pounds more borrowing. Others say it could be more.

"That is a lot to ask," said Stefan Koopman, senior macro strategist at Rabobank.

"There is risk of a funding strike, which to some extent has already shown up in the form of a weaker currency."

"There is a concern about debt sustainability versus other countries... There is a huge wave of gilt issuance coming through and that will be an overhang on the market," he told an M&G conference on Tuesday.

A test of the appetite for gilts is likely to come next week when Britain's Debt Management Office is expected to offer a chunk of 30-year bonds via a syndicated sale.

Looking further ahead, the pound may need to fall further to attract investors.

Dean Turner, an economist at UBS Wealth Management said the potentially unlimited liability of support for gas bills was weighing on investors. "Until we get some clarity on that, I just can't see the situation turning around," he said.

Kwarteng is expected to deliver a fiscal statement to parliament next week which could include those funding details.

Not everyone is avoiding British assets. Morgan Stanley (NYSE:MS) on Friday said long-dated gilts pose a buying opportunity relative to German bunds as a lot of Britain's worrying fiscal news is already priced in.

But many investors remain concerned.

"It is hard to avoid the conclusion that a UK sovereign risk premium has been going into the pound – presumably on doubts about at what price investors would be prepared to fund future UK borrowing plans," said ING rates strategist Antoine Bouvet.