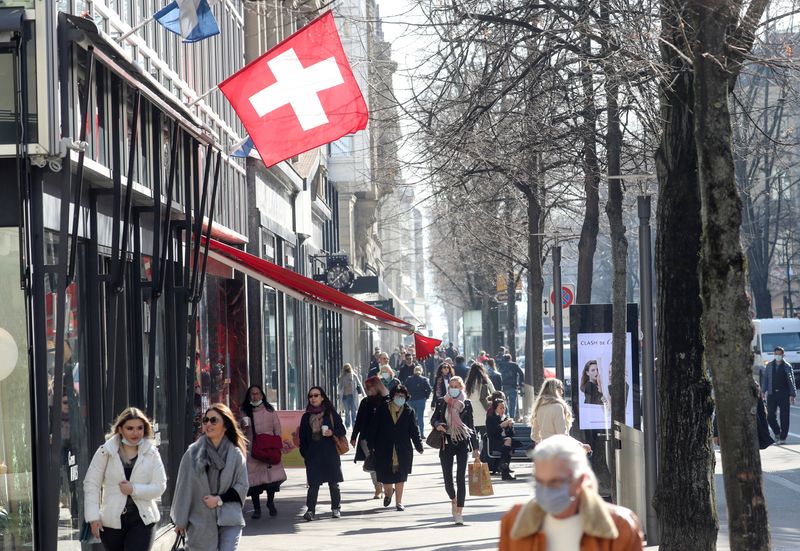 ZURICH (Reuters) - The Swiss economy is expected to expand by 2.6% in 2022, the government said on Wednesday, becoming the latest region to downgrade its growth estimates due to the war in Ukraine and uncertainties in China.

The deceleration, from the previous forecast for 2.8% growth in March, was also due to rising prices for food and energy, the State Secretariat for Economic Affairs (SECO) said.

SECO also reduced its forecast for GDP growth in 2023 to 1.9% from the 2.0% rate it previously expected. All the figures are adjusted to take out the effect of sporting events.

"The Swiss economy made a solid start to the year, but prospects for the international environment have waned," SECO said. "In particular, the global economy is at risk from the war in Ukraine and developments in China.

"The war in Ukraine could have a more severe impact than previously expected," it added.

World market prices have risen sharply for key Russian and Ukrainian exports, such as energy resources and certain food staples and animal feeds, it added.

"The resulting inflationary pressure is curbing demand in major trading partners, with adverse effects on exposed sectors of the Swiss economy," SECO said.

"At the same time, China's drastic pandemic containment measures are likely to weigh heavily on its economy."

The Organisation for Economic Cooperation and Development last week cut its forecast for global growth to 3% this year, much less than the 4.5% the OECD had expected in December.

German Finance Minister Christian Lindner on Monday said there was a risk of a period of high inflation and low growth following Russia's invasion of Ukraine.

France's economy shrank unexpectedly in the first quarter as consumers struggled to cope with surging prices.

The Swiss National Bank will take into account the economic situation when it decides its monetary policy on Thursday.