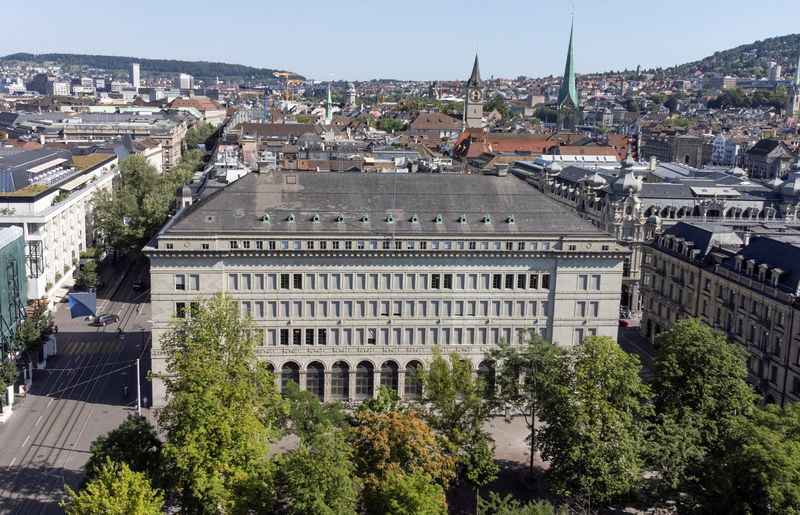 ZURICH (Reuters) -The Swiss National Bank reported a first half loss of 95.2 billion Swiss francs ($100.08 billion) on Friday, the biggest six month loss posted by the central bank since it was set up in 1907.

The SNB's results were hit by stock market declines, falling bond prices and the franc's appreciation which severely dented the value of its massive foreign currency holdings.

The result was dragged down by the second quarter, where the SNB reported a loss of 62.4 billion francs, which was also its worst quarterly performance on record.

During the half year, the SNB made a loss of 97.4 billion from its foreign currency positions, while it made a 2.4 billion franc profit on its gold holdings.

Falling stock markets meant the SNB reported a 44 billion franc valuation loss on the equities it holds, while rising bond yields meant it suffered a 48.7 francs billion loss in the value of its fixed income investments.

The paper loss was worsened by a 10.3 billion loss due to exchange rates.

The Swiss franc has risen in value past parity versus the euro in recent weeks after the SNB ditched its policy of limiting the currency's appreciation and raised its interest rate to tackle resurgent Swiss inflation.

SNB Chairman Thomas Jordan said last year that making profits was not the SNB's aim and would not affect its monetary policy goal of price stability - keeping inflation under 2%.

"The SNB's monetary policy mandate always takes precedence, and there can also be times when fulfilling this mandate means accepting losses," he told the bank's shareholders in April 2021.