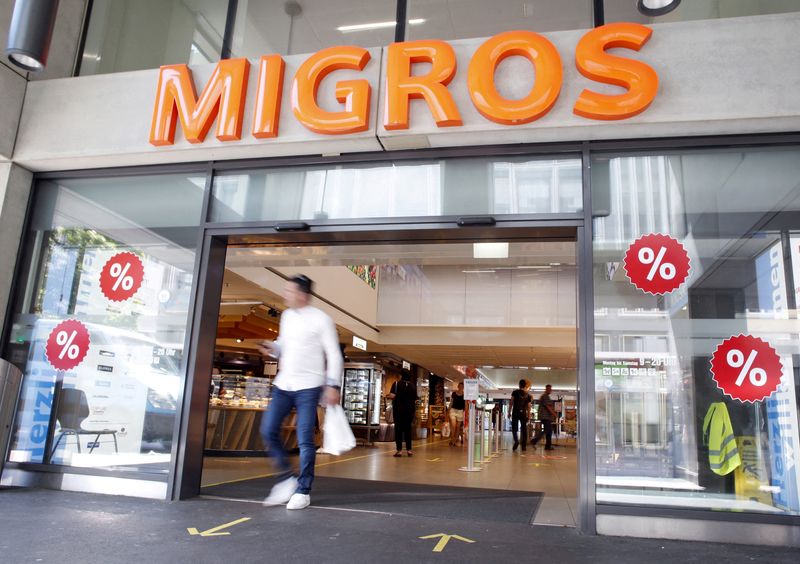 © Reuters. FILE PHOTO: The company's logo is seen above the entrance of a supermarket of Swiss retail group Migros in Zurich, Switzerland June 24, 2020. REUTERS/Arnd Wiegmann/File Photo

ZURICH (Reuters) - Members of Swiss cooperative supermarket chain Migros have voted by a clear majority to uphold the ban on alcohol sales its health-conscious founder adopted when he set up the business in the 1920s.

The alcohol ban was instituted in 1928, three years after the chain's founder Gottlieb Duttweiler began his pioneering retail work by sending out five trucks with just six basic items to sell direct to households from one village to the next.

More than 630,000 members of the cooperative which owns the stores cast votes on whether to upend the tradition at the now ubiquitous outlets and put booze on the shelves, a move opponents said would betray Duttweiler's founding philosophy.

"The result is not surprising because all polls pointed to a clear 'no'. The hurdle for a change in the statutes was very high with a two-thirds majority. Migros democracy won," Ursula Nold, who chairs the Federation of Migros Cooperatives, said.

Duttweiler, who was concerned about the well-being of his customers, banned both alcohol and tobacco sales from the stores that emerged from his initial truck business. Tobacco was going to remain banned in any event.

Addiction experts said ending the ban would have removed a safe haven for alcoholics to shop.