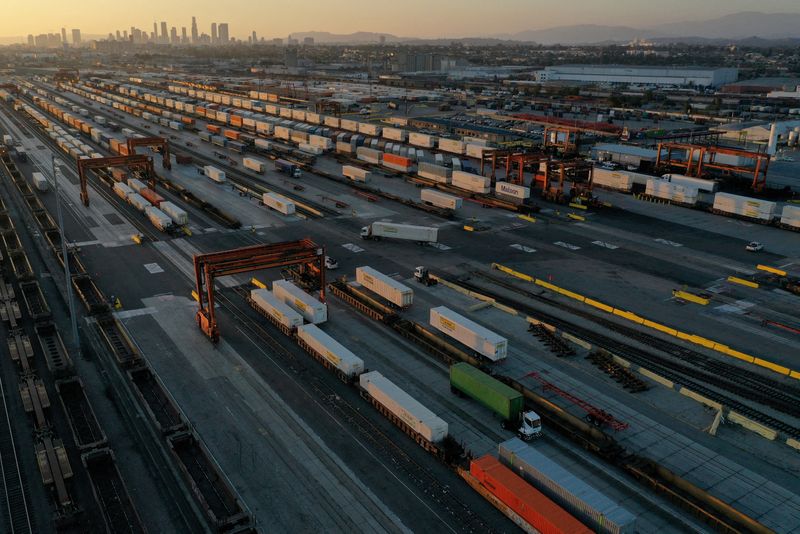 © Reuters. FILE PHOTO: An aerial view of gantry cranes, shipping containers, and freight railway trains ahead of a possible strike if there is no deal with the rail worker unions, at the Union Pacific Los Angeles (UPLA) Intermodal Facility rail yard in Commerce, Cal

WASHINGTON (Reuters) -A third U.S. rail union voted on Monday to reject a tentative national contract reached in September, but expects to continue negotiating to reach a deal.

The International Brotherhood of Boilermakers (IBB), which represents about 300 rail employees, rejected the agreement, said the union and the National Carriers’ Conference Committee (NCCC), which represents the nation’s freight railroads.

Last week, the NCCC and another union that voted down the contract -- the International Brotherhood of Teamsters (BMWED) that represents 11,000 workers -- agreed to extend a potential strike deadline until at least Dec. 4.

Labor unions have criticized the railroads’ sick leave and attendance policies and the lack of paid sick days for short-term illness.

The IBB negotiations remains in a cooling-off period - in which neither side can impose a strike or work stoppage - until early December, the union said. It added it "fully expects to continue negotiating further toward a satisfactory contract in the future with the NCCC."

The railroad industry group said it was disappointed in the vote but "will remain engaged with IBB throughout the remaining cooling off period." On Nov. 21, the two largest rail unions representing conductors and engineers will announce their votes on the contract. They represent approximately half of all unionized rail employees.

A rail shutdown could freeze almost 30% of U.S. cargo shipments by weight, stoke inflation, cost the American economy as much as $2 billion per day and unleash a cascade of transport woes affecting U.S. energy, agriculture, manufacturing, healthcare and retail sectors.

BMWED said last week without an extension railroads could have soon begun ceasing rail operations in anticipation of a Nov. 20 strike.

Earlier in November, the International Association of Machinists and Aerospace Workers (IAM) representing about 4,900 workers narrowly ratified the contract, the seventh of 12 to approve the deal. The Brotherhood of Railroad Signalmen (BRS) union, representing more than 6,000 members, voted against the deal.

The deal included a 24% compounded wage increase over a five-year period from 2020 through 2024 and five annual $1,000 lump sum payments.