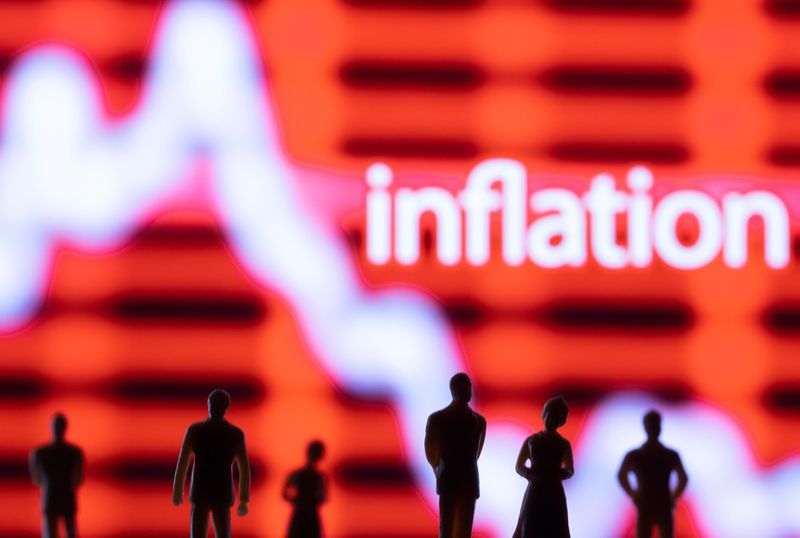 © Reuters. Figurines are seen in front of displayed stock graph and word "Inflation" in this illustration taken June 13, 2022. REUTERS/Dado Ruvic/Illustration

HONG KONG (Reuters) - Tiger Global, one of the world's largest hedge funds, saw its flagship fund fall by 50% in the first half of the year after it underestimated the impact of a surge in global inflation on markets, according to letter to investors.

The U.S.-based fund lost 24.7% in the second quarter, increasing its loss for the first half to 50% from the end of last year, the letter issued by Tiger earlier this week and seen by Reuters on Friday said.

Tiger did not immediately respond to Reuters request for comment.

In the letter Tiger said it underestimated the circumstances that had enabled inflation to rise and persists.

"Our portfolio composition and exposure levels were not well suited for the volatilities that followed," Tiger said, though it intended to continue to increase ownership in the best companies at what it saw as interesting prices.

The fund's China exposure, however, fared better in its overall portfolio, it said, without giving details, despite a sharp slowdown in the world's second-largest economy and turmoil in the property sector.

"While China remains out of favor among most investors, our Chinese longs have declined less year to date than their U.S. counterparts," the fund said, referring to long positions betting on a rise in the asset in question.

It added it is making careful bets while bearing in mind regulatory and COVID-19 related risks.

This year has been extremely challenging for the global hedge fund industry, as assets under management (AUM) across the sector declined by $79 billion in the first six months, according to data by industry tracker HFR.

The decline was driven by $37.7 billion of performance-based decline and $41.1 billion of net outflows, the data showed. AUM across the sector declined by $31.2 billion in June, marking the steepest loss since March 2020, the start of the pandemic.

Tiger's flagship fund had reported a compound annual return of 21% after 20 years' operation in 2021, the letter said.

The fund is allowing investors to withdraw up to 33% of their existing balances in 2022, compared with a normal 25% limit, but uptake has been limited and greatly exceeded by year-to-date inflows, it added.