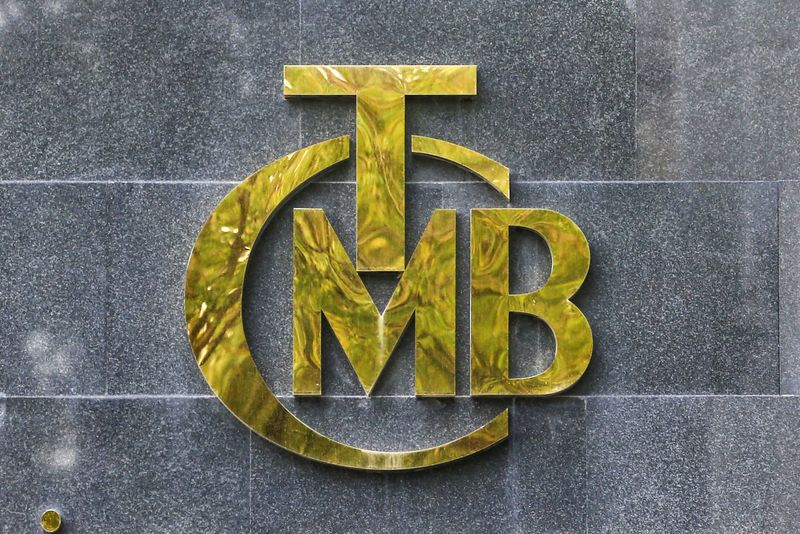 © Reuters. FILE PHOTO: A logo of Turkey's Central Bank is pictured at the entrance of its headquarters in Ankara, Turkey October 15, 2021. REUTERS/Cagla Gurdogan

ISTANBUL (Reuters) - Turkish exporters have told the Central Bank they may struggle to meet a new requirement for them to sell 25% of their hard currency revenues to the bank and could also be left exposed to volatility in Turkey's lira, three exporters said.

They said they expressed their concerns about the regulation, announced this week to help authorities support the lira and replenish the bank's depleted reserves, in an online meeting with Central Bank governor Sahap Kavcioglu on Wednesday.

According to the exporters who spoke to Reuters, Kavcioglu told them that the lira, which lost 44% of its value last year and has fluctuated wildly in recent weeks, would now stabilise and the exporters should not be concerned.

Kavcioglu also told the exporters they could expect new credit lines from the central bank and state-controlled export bank Eximbank.

Exporters who attended the meeting had said they were worried that the requirement to convert substantial amounts of money to lira, some of which would have to be switched back to foreign currency to pay costs, would bring risk.

"There was an expectation for an instrument similar to a forex rate guarantee for the 25% portion to be sold to the central bank," one of the exporters said, referencing a deposit-protection scheme unveiled for individuals last month.

"However, Kavcioglu said they expected a stabilization in the exchange rate... He said we wouldn't have a big loss when buying and selling."

"We were told at the meeting that we wouldn't face issues in finding forex" the same source added.

Turkey's lira has slumped since September when the Central Bank, under pressure from President Tayyip Erdogan to ease monetary policy, launched a series of interest rate cuts. Erdogan says the steps will promote exports, lending and growth.

Textile Exporters and Employees Association Chairman Ergin Aydin, who did not attend the meeting, said on Wednesday textile exporters would have a hard time meeting the requirement to convert 25% of revenues into lira, since the Turkish currency made up only 18% of their expenses.

The required conversion would hit profits, which have margins of 7-8%, he said. "It doesn't add up."