Turkish lira on slow slide in search of FX relief 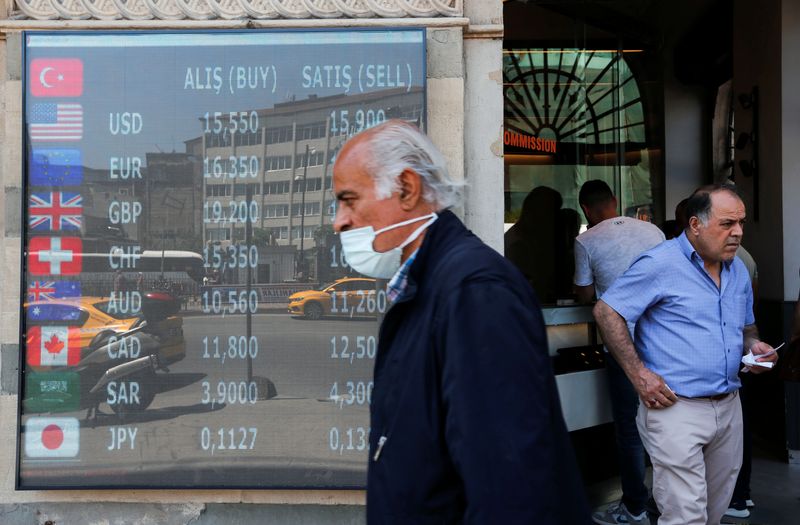 ANKARA (Reuters) - The Turkish lira slipped again on Monday, sustaining a slow slide towards 18 against the dollar as concerns mounted about the government's foreign exchange policy in the face of surging inflation and fears of global recession.

The slow depreciation could continue unless authorities find a new source of foreign funds to buffer depleted official reserves, analysts say. Adding to uncertainty over coming weeks, corporate depositors will decide whether to largely stick with special state-backed lira-protected accounts.

The lira weakened as much as 0.4% to 17.8335 against the U.S. currency, trading at its weakest levels since a full-blown currency crisis in December, when it hit an all-time low of 18.4.

"We are seeing the lira losing limited value each day with the current policy. The balance in forex can only be achieved with the lira losing value, albeit limited," said a treasury desk trader at one bank.

The lira has steadily weakened 6.3% this month.

The Turkish Central Bank's quarterly inflation report on Thursday and the U.S. Federal Reserve's expected 75 basis-point interest rate hike on Wednesday were set to be key focuses of attention for investors this week.

On Thursday the Turkish central bank is expected to again raise its end-year inflation forecast from 42.8% previously. According to a Reuters poll, annual inflation is expected to be 70% by end-2022. It hit a 24-year high near 80% last month.

The rampant inflation was triggered by a series of unorthodox interest rate cuts which knocked 44% off the lira's value last year. It has weakened another 26% this year.

Despite the unrelenting depreciation, the central bank is expected to keep its policy rate steady at 14% for at least another year, focusing instead on macro-prudential measures on loans and liquidity.

The central bank's net forex reserves have tumbled to just over $6 billion this month, the lowest levels since 2002, with bankers calculating forex reserves excluding swaps to be minus $55 billion.

The treasury desk trader said a big question is whether new foreign forex resources will flow into Turkey, given the need for fresh resources is at unprecedented levels.

Authorities sought to stem the lira's decline from the end of last year with special bank accounts, dubbed KKM, protecting savers and corporates from large lira falls to discourage hoarding of U.S. dollars, euros or gold.

"Markets are monitoring the rollover of corporates' KKMs which begin this week and intensify over 3-5 weeks. We have not yet seen heavy forex demand due to KKM. But the issue of whether KKM rollovers will create forex demand will be important for the course of the lira," the trader said.

(This story reflies to drop extraneous word in headline.)